Book Review and Giveaway: As One Devil to Another by Richard Platt

This is a ‘devilishly’ engaging look at the devil’s work against believers.
As One Devil to Another: A Fiendish Correspondence in the Tradition of C. S. Lewis' The Screwtape Letters
by Richard Platt (Author), Walter Hooper (Preface) 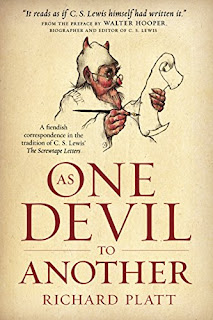 See more of Richard Platt's work, including glimpses of work in progress, at RichardPlattAuthor.com.
As One Devil to Another is an astonishing debut work that C. S. Lewis's biographer and foremost Lewis authority Walter Hooper calls "a stunning achievement, the finest example of the genre of diabolical correspondence to appear since this genre was popularized by C. S. Lewis." Enter into this chilling and diabolical tale, one that reveals the very tricks and strategies of Hell. Through a series of letters between devils created by Platt, senior devil Slashreap trains his young protégé, Scardagger, to win an individual soul away from Heaven and into their clutches. As the devils plot their way to triumph, they reveal the spiritual dangers and risks we face in today's society. Their frighteningly accurate perspective on issues such as contemporary technology and sexual mores is interwoven with timeless matters such as the power of prayer, the purpose of suffering, and the promises held out by Heaven . . . and Hell. Destined to become a modern classic, As One Devil to Another is a brilliantly written, deeply unsettling perspective on twenty-first-century society . . . a glimpse of ourselves through the eyes of those who have embraced their underworldly existence.


Review:
Scardagger is a young demon chosen to train under the senior devil, Slashreap. The training is accomplished by letters written from Slashreap to Scardagger instructing him how he should deal with a young human to keep her from becoming a believer of the Adversary, God. The young woman is a college student so she is an appropriate place to have ‘liberal’, and ‘progressive’ influences. The devils can use many tools made available like television, computers and cell phones to distract the young charge from any thoughts of charity and compassion to help others with the love of Christ.

Unfortunately, the young lady has an Aunt who is a warrior of the Lord. The Aunt offers the girl a place to stay to save expenses while in school and to be there to help the Aunt who is becoming older. The young woman has also made a friend of an elderly gardener at the college who is another warrior for Christ. While sitting in the garden she meets a young man contemplating a squirrel and they begin a friendship.

Scardagger doesn’t realize how dangerous it will be for the girl to meet the gardener and to live with her Aunt and be influenced by their love and faith. Slashreap of course sends letters chastising Scardagger for his failures but the slide to faith has already begun.

This is a wonderful modern version in the vein of the original of The Screwtape Letters by C.S. Lewis. This book is written in a very similar manner with the letters in sarcastic and archaic, formal tone but referring to modern trappings and circumstances. There is even a tie back reference to the original conversation that led to the writing of the Letters by C.S. Lewis.

I had read (and listened to) the original book so when I saw this, an up to date version, I decided it would be a good read for the Ladies Book Club at church. They were a bit confused when they started reading as it is written from the view of the devils so it took a bit to get our Christian minds to recognize the work of the devil. It was not our usual fare but they found it surprisingly engaging and enlightening. I do recommend this to those who read the original and to others who might be interested in how the devil thinks to prevent belief.


I selected this book especially for our Ladies Book Club.


GIVEAWAY:
Paperback Book (US Only)

(Don't forget to fill in the form for entry!)
For 3 Extra Bonus entries
(a) comment on the review, OR
(b) Visit the Author's Website.

* This contest is open to US only for paperback book.
* This contest will close 5 PM (Central) July 15, 2017. Winner will be announced in the Sunday Post on July 16, 2017.
Winners are asked to respond on the winners form linked in the announcement or by email
Posted by Martha Eskuchen at 9:16 PM

Email ThisBlogThis!Share to TwitterShare to FacebookShare to Pinterest
Labels: 4.5, As One Devil to Another, Book Club, Book Review, Inspirational, Religious, Review, Richard Platt