Book Review and Giveaway: A Texan's Choice, Heart of a Hero Series #3 by Shelley Gray

This is a lovely story of love and redemption.
A Texan's Choice, Heart of a Hero Series #3
By Shelley Gray 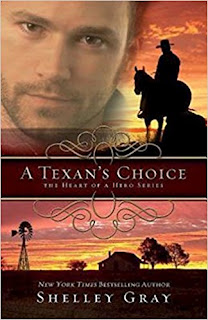 Product Description
Texas, 1874. Long ago, Scout Proffitt gave up on ever being a man of honor like his Civil War hero brother Clayton. But when Scout steps foot on the rundown remnants of the Circle C ranch, he wonders if maybe-just maybe-the Lord has something different intended for him.
Rosemarie has lived most of her life doubting her worth and shouldering the blame for her brother's death. But when a stranger rides onto her ranch, claiming he owns it, she suddenly is given a choice: either keep looking at the dark side of life . . . or dare to dream.


Review:
This is a lovely story with a realistic setting in 1874 Texas and some darker characters. Scout Proffitt and Rosemarie are two damaged people who find love, worth and redemption.

Rosemarie lives with her family on a dirt-poor farm in Texas. Her father, a squanderer, is on his death bed with a room full holding death watch. Rosemarie is barely allowed in the room, much less near enough to say goodbye. But Rosemarie is used to being ignored and treated as less than worthless. Her family abandoned her emotionally when she was nine years old and it doesn’t matter how hard she might try to work, it will never be enough.

Scout Proffitt is a wanted man, a known killer. He wanted to follow in his big brother’s footsteps as a war hero when he ran away from home over 15 years ago. But living in the world without resources didn’t turn out as he planned. He thinks he may have found a way out when he won a farm in a bet a few months back. He shows up to find the farm is mostly dilapidated and dreary. The man he is claiming it from has just died.

Though stoic, Scout is inwardly dismayed when Rosemarie’s mother and sister pack their things and leave…leaving Rosemarie behind. She proposes that she clean and cook for him if he lets her stay. He agrees she can stay for two weeks.

Just as Scout and Rosemarie are trying to sort out a new living arrangement, four outlaws show up to seek Scout’s leadership for a job that promises them all a new start. Scout can’t turn down the opportunity so once again he rides off and Rosemarie is left alone.

Rosemarie is a mistreated soul who shows gumption and strength of character just in moving forward each day. Scout is a good man inside with a dark past that haunts him. I couldn’t help but root for them. The messages of love and redemption are shared through the story and not in any preachy way.

The story jumps a bit as the chapters move to introduce the four outlaws who eventually show up at the ranch. This was a little confusing but I was sure there would be a connection. I read this with my Ladies Book Club and we all noted that there were numerous typographical errors and several fact errors that should have been caught during editing. Although noticeable, it did not damage our enjoyment of the story.

The story reads easily and kept my attention. This is the third in the series and reads fine as a standalone but I was glad to realize that I had books one and two in my Kindle library. This is the second story I read by Ms. Gray and I am impressed by her versatility. I recommend this story to readers who enjoy western historical romance with a lovely message of redemption.


I picked this book up in print at Christianbook.com for $2.49 a copy for Ladies Book Club.


GIVEAWAY:
Paperback Book (US Only)

(Don't forget to fill in the form for entry!)
For 3 Extra Bonus entries
(a) comment on the review, OR
(b) Visit the Author's Website.

* This contest is open to US only for paperback book.
* This contest will close 5 PM (Central) July 22, 2017. Winner will be announced in the Sunday Post on July 23, 2017.
Winners are asked to respond on the winners form linked in the announcement or by email
Posted by Martha Eskuchen at 9:00 AM