Book Review: When the English Fall by David Williams

This is well written, insightful and engaging.

When the English Fall
by David Williams 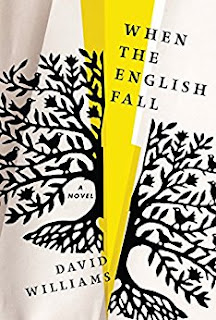 A riveting and unexpected novel that questions whether a peaceful and nonviolent community can survive when civilization falls apart.
When a catastrophic solar storm brings about the collapse of modern civilization, an Amish community in Pennsylvania is caught up in the devastating aftermath. Once-bright skies are now dark. Planes have plummeted to the ground. The systems of modern life have crumbled. With their stocked larders and stores of supplies, the Amish are unaffected at first. But as the English (the Amish name for all non-Amish people) become more and more desperate, they begin to invade Amish farms, taking whatever they want and unleashing unthinkable violence on the peaceable community.
Seen through the diary of an Amish farmer named Jacob as he tries to protect his family and his way of life, When the English Fall examines the idea of peace in the face of deadly chaos: Should members of a nonviolent society defy their beliefs and take up arms to defend themselves? And if they don’t, can they survive?
David Williams’s debut novel is a thoroughly engrossing look into the closed world of the Amish, as well as a thought-provoking examination of “civilization” and what remains if the center cannot hold.


Review:
I was immediately drawn to this when I noted the genre and blurb. I have been reading a lot of post-apocalyptic stories and find some are more realistic than others. This one could happen and is different because of the setting and characters.

This story is told in the form of diaries found on an Amish farm outside of Lancaster, Pennsylvania. Jacob, the father of the family, shares of the struggle his family has been experiencing. Their 14-year-old daughter, Sadie, has been suffering from seizures, mostly nightmares, but not always at night. Sadie doesn’t understand either but she thinks she has had a strange premonition ability, knowing things before they actually happen. During her trance episodes, she has been muttering “they fall, they fall” and speaking of “Jimmy” although there is no Jimmy in the community.

Jacob’s diaries reflect how the people of the Order “are never really apart, as much as we choose to set ourselves different from the world that surrounds us.” He explains how the Amish people live simple lives, focusing on their faith and trust in God. They avoid many modern conveniences, such as televisions and phones and most equipment that relies on electricity. They use horses and buggies or wagons rather than vehicles and they farm using mostly older, nonmechanical equipment.

A night comes when there are flashing lights in the sky and Sadie notes that “they fall”, like angels falling. A young man rides from farm to farm delivering news. The word spreads that a solar flare has occurred which has taken out the power grid that the “Englishers”, as they call those not of the Order, rely on. At first there is no immediate impact on the Amish communities but it isn't long before the military arrives to take food to the nearby towns.

All too soon the looting and violence of the English towns begins to encroach into the peaceful community. How will the pacifist people respond to the theft and violence? How do they protect themselves? I really like how David Williams handles this dilemma with beautiful writing and insight into the Amish community. It is realistic and fitting. This is a quick read and I would like to read more. I recommend this to those who are interested in the Amish people and how they might react when a disintegrating society starts to bring its ills into their territory.


I received this from the publisher through NetGalley. It qualifies for my NetGalley Challenge and "W" in Alphabet Soup Challenge.
Posted by Martha Eskuchen at 8:14 PM