This is a good enough continuation of the stories to keep the series moving forward.
Avenging Home: The Survivalist Series, Book 7
Written by: A. American
Narrated by: Duke Fontaine 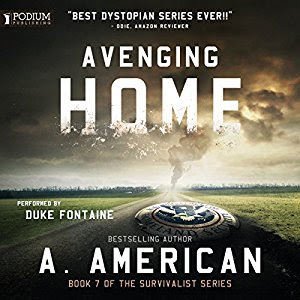 Publisher's Summary
In Enforcing Home, Morgan and his group suffered some loss. They discovered their old foes weren't gone, as they'd thought. Not only were they not gone, but they were also stronger than before. Morgan would have to deal with this threat while at the same time trying to restore some sort of quality of life to his community.
But this wasn't going to be easy. With the bombing at the market and the wounding of his daughter, Taylor, it became all too clear to Morgan that he was once again in a fight for the lives of those who mattered most to him. Taylor was injured and would need care for some time. It wouldn't be easy. Added to that was the realization that he would have to deal with second-guessing himself. Was it his fault that she was now hurt?
In Avenging Home, we see how this long-running battle between Morgan's people and their number one nemesis plays out. While Morgan thinks this is the biggest threat they face, there are things on the horizon he cannot yet see that are going to dwarf these problems.
Morgan has lived in a vacuum. He's had little information about the outside world. While he's used radios to listen to what he can, there's been precious little real information. But now he's found what he believes to be a reliable source and knows when and where to listen. But is it valid? Or is it simply propaganda? News and information can be powerful tools, but they must always be taken in context to make an educated decision. And the challenge is that there's only one source. When you have to make decisions that mean the difference between life and death, the process becomes even more critical.
So we'll follow Morgan and his tightly knit group as they are once again in the fight. Will they finally defeat the federal thugs in their backyard? And, more importantly, what will be the cost?
©2016 A. American (P)2016 Podium Publishing


Review:
I enjoyed listening to the latest confrontations in this series although I didn’t find it as good as some of the earlier books. This one seemed to have a little shallower focus on the characters while preparing for a showdown with the very nasty federal opposition. The books really should be read in sequence to know the characters.

The local town community is still seeking leadership from ‘Sheriff” Morgan. Morgan meets new suppliers in the market, gathers engineers to work on the power plant, recruits workers for the community garden and prepares his family and friends for a shoot-out. Meanwhile he must deal with captured enemies as well as drunken murderers and local thieves. Morgan doesn’t want to be judge, jury, sentencer and executioner… but someone has to do the hard jobs. He is seeking someone to serve as a judge at least for sentencing if not for fact finding as mostly the facts are clear when the culprits are caught in the act. Sadly, the man who steps forward for the job is just not the right person and he and his guards have to be dealt with firmly.

There are the usual antics from Sarge and his sometimes infantile and trigger-happy army guys, Mike and Ted. This repeated some of the male crudeness and of course violence considering the battle that occurs. Other characters add their part -- humor, determination, fear, revenge and even romance -- to the story. There were more survival tips shared, although maybe not as many as earlier books. I guess the help from the local military and the powers in high places really gives Morgan's neighborhood an edge but I couldn't help feeling that things were just a bit too easy going in the town.

Morgan catches a radio broadcast that brings disturbing news. They can’t tell if it is true, a hoax or propaganda, but it is scary if real. This book does a good job of continuing the story, wrapping up one phase and introducing a new conflict for future books. I hope the next book has a little more depth to it.

Audio Notes: Duke Fontaine does his usual solid narration of these characters. It just seemed to me that even he didn't have quite the same enthusiasm for this episode. Or maybe that was me projecting. I do enjoy listening to these though as they move well in audio.


I am working on my Audio, TBR and Alphabet Challenges. This is a series I like and "A" title.
Posted by Martha Eskuchen at 12:30 PM