I started this sixth book in the series and although calmer than prior books, I found it hard to put down. 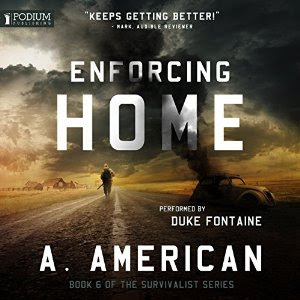 
Publisher's Summary
Morgan has managed to get through a lot. Having made it back to his family and dealt with the issues of unscrupulous neighbors, he then had to deal with the presence of the federal government and their nefarious activities. But with the help of his close-knit group he prevailed. Life is settling into a familiar routine. And with the help of the US Army, they are starting to rebuild their community. But just when Morgan thinks things are assuming some kind of normal, another surprise lands in his lap. He's made sheriff.
Harkening back to a time when law enforcement was a local face in the community, Morgan is forced to step up and be that face, much to his chagrin. With the help of Thad, Danny, and the rest of the crew, he accepts the challenge and tries to make a positive impact. But he's in for yet another surprise. New foes will arise, and old ones will return to conspire to destroy his efforts.
Morgan's group will suffer loss, injury, and constant assault. His new position has made him a target as well as those he loves. The peace and tranquility that the group has fought so hard for will continue to elude them. The fight, as Morgan soon learns, is just beginning.
©2015 A. American (P)2016 Podium Publishing


Review:
Morgan is now sheriff of his community and the local town. He isn’t thrilled but agreed to accept the responsibilities with several of his friends as deputies. His own community is experiencing a time of rebuilding and peace but that doesn’t last. There are many who are hungry and unrest is spreading especially as bullies try to take from others by force. These are local problems, but not the worst Morgan has to deal with. Stragglers with children who are coughing badly pass outside the neighborhood gates. Some of the community children do not realize there may be danger playing with these sickly waifs.

Morgan’s friends learn that the corrupt federal DHS forces never made it to the army base where they were being sent. Instead they escaped and are building forces with plans to eliminate Morgan, Sarge and the rest of the ‘resisters’. A stranger wander in and, although it is not clear if he can be trusted, he slowly becomes part of the group.

Fortunately, Sarge and Morgan have friends in high places. They are able to get the supplies for a field hospital flown in as well as getting some heavy power equipment that will be useful as the skirmishes with the DHS scoundrels intensify.

I was glad to be back with the familiar characters and I was pulled right into the story. The author addresses issues relating to the society reorganization as well as dangers of disease and lawlessness. This episode moves forward with daily concerns and not all the action is in fighting… there is enough of that too to keep things interesting. There are moments of humor and almost happiness as the community and nearby town look to reestablish a firm footing.  But Morgan becomes more of a target especially for the oncoming threat of a major attack by the DHS forces.

There was a bit more male crudeness and some rather brutal torture in this book. There was also some repetition but it didn't have a noticeable impact on my enjoyment. I found this engaging and I look forward to more action in this series.

Audio Notes: Duke Fontaine has certainly become the voice of these characters for me. His clear narration enhances the engagement in the stories and makes this a fast listen.


This was a 2016 selection for my own Audible library.
Posted by Martha Eskuchen at 10:20 PM