This portrays an exciting and scary world - dreams of a better world but one that is ready to go up in flames.

A Better World (The Brilliance Trilogy Book 2)
by Marcus Sakey 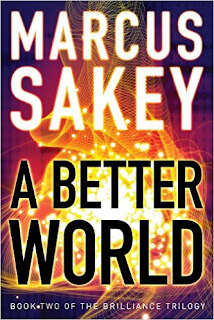 The brilliants changed everything. Since 1980, one percent of the world has been born with gifts we’d only dreamed of. The ability to sense a person’s most intimate secrets, or predict the stock market, or move virtually unseen. For thirty years the world has struggled with a growing divide between the exceptional…and the rest of us.
Now a terrorist network led by brilliants has crippled three cities. Supermarket shelves stand empty. 911 calls go unanswered. Fanatics are burning people alive.
Nick Cooper has always fought to make the world better for his children. As both a brilliant and an advisor to the president of the United States, he’s against everything the terrorists represent. But as America slides toward a devastating civil war, Cooper is forced to play a game he dares not lose—because his opponents have their own vision of a better world.
And to reach it, they’re willing to burn this one down.


Review:
This story picks up where book 1, Brilliance, left off. Nick Cooper has exposed the villainy of the American President and Nick’s own boss, the head of the Department of Analysis and Response. Those men had staged a massacre, blaming it on John Smith, a brilliant who they labeled as a terrorist. Now John has been exonerated and is free to move around the country to fulfill other plans.

Nick is pulled into the position of advisor to the new President where Nick is a single voice struggling to find a way to defuse the fear, animosity and tension between the brilliants and all ‘normal’ humans. Nick learns that scientists have been searching for the secret to the Brilliant gnome. Nick believes this work can solve the problem and he seeks to protect the scientist before others destroy him and his research. But other men in power have a different vision for a better world than Nick’s harmonious vision.

Soon Nick begins to think John has some serious conspiracy plans of his own and, to Nick’s dismay, he has been played as a puppet. Even though Sharon and Nick have grown close, they keep their own secrets so they are not certain if they can trust each other as the lines of right and wrong seem to waver. Nick continues to race against time and opposing forces but each plot he exposes, instead of diffusing the tension, seems to fuel the fires of unrest and civil war. The Federal Government threatens the brilliant community that has been developed to provide a safe haven for brilliants.

This story presents a scary (for its possible realism) picture of how a handful of powerful men can manipulate facts, people, news and resources to meet their own agenda. The characters are complex and the plot twists, constant action and suspense kept me turning pages. This is a good second installment but it ends rather mid theme so I am glad that I have book three to finish out the excitement.


I received this series through NetGalley for an honest review. It qualifies for my NetGalley Challenge.
Posted by Martha Eskuchen at 6:45 PM