A License to Wed: Rebellious Brides
by Diana Quincy 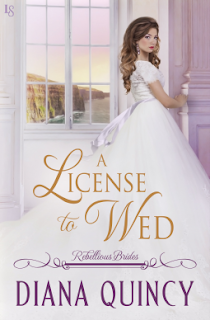 Perfect for readers of Madeline Hunter, Lisa Kleypas, and Sabrina Jeffries, the Rebellious Brides series continues with a sizzling tale of forbidden love between a socialite and a scholar—who might just be an infamous spy.
Lady Elinor Dunsmore made the mistake of falling for her older brother’s best friend, who vanished after a night of unbridled passion. Six years and a lifetime later, their eyes meet across a Paris salon. Her friends and family believe she’s dead, but Elle is very much alive. She’s now associated with a ruthless general, who wants her to seduce the man who broke her heart in order to learn his deepest secrets. Is Will a mild-mannered scholar—or the notorious agent they call The Razor?
The bastard son of an earl and an actress, Will Naismith always knew he was an unsuitable match for Elle Dunsmore, no matter how powerfully he ached for her. And yet he almost allowed his desires to spoil her glittering future. After the agony caused by Elle’s supposed death, Will has devoted himself to the Crown, but his entire life has been leading up to this unexpected reunion. As much as he still wants her, though, he must not succumb to lust once again. For his mission is delicate—and Elle is delectably dangerous.
Includes a special message from the editor, as well as an excerpt from another Loveswept title.


Review:
Lady Elinor was only a young girl when she determined that she would marry her older brother’s best friend, Will. During the celebration of her eighteenth birthday, Elle manages to break Will’s defenses down. After their joint passion he offers to marry her but she refuses as it sounds like he is offering out of duty.

Will is enthralled with Elle but he has stayed away from her as he knows she is a lady of station who deserves better than a nobelman’s bastard son. When Elle refuses his offer, he takes off to town and then gets called away for a work related task. When he returns a few months later, Elle has married a wealthy French aristocrat.

Six years later they meet unexpectedly in Paris. Will thought Elle was dead and she is shocked to see him in Paris. They each felt abandoned or rejected from their earlier encounter. They are both hiding secrets and begin a reluctant relationship filled with distrust and misunderstandings. They actually work at cross-purposes because they don’t confide in each other although there are glimpses of hope from each that keeps the relationship moving forward.

I do not know enough to know if the description of Parisian fashions in the time period are accurate but they are described as quite risqué. These details are part of the sensual leaning that runs through the book. This is a character driven story and I enjoyed the secrets, tension and danger in the storyline. There is a strong emphasis on the attraction between the main characters and there are several sexual encounters. The later scenes are fairly explicit but not in an unpleasant way. At least the reader knows they really care for each other even if the characters haven’t discovered that yet.

This is a new author for me. The writing flows well and this is easily read as a standalone. I enjoy historical romances and liked the second chance theme of this tale. I would recommend this to readers who enjoy sexy romance.


This title released on 7/5/16. I received this from the publisher through NetGalley for an honest review. This qualifies for my NetGalley Challenge.
Posted by Martha Eskuchen at 3:23 PM