Happy Friday!
Thank you all for continued well wishes for my hubby. They finally got his blood pressure, oxygen and sugar levels in good ranges so he was discharged from the hospital (an hour away) today and moved to a rehab facility here in town that is only half a mile from our home. Much easier for me to go back and forth.
I might (hope to) be able to get a picture of the latest book group this weekend.

Thank you to all who entered the July 1 Pick. There was one automatic win again this week. Automatic wins are those who requested the book four times without other people asking for that book during those weeks. There was one title with a multiple block and it was won this week.
AUTO: bn100 gets Realms of Shadow


CONGRATULATIONS
to Random.org picked Winners from July 1 Pick:
Rita gets Never Marry a Cowboy through the block
Mary P gets a GC 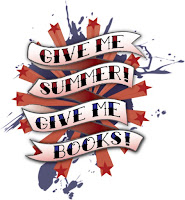 This works for me -- every season!
Image found at Book People's Blog.

I am happy to say that so far about 974+ books have found new homes! YAY. I have to update my print out to check the exact number sent out - a few were never claimed. I periodically update the lists - deleting those won. You can still go to the Friday Pick list link to see older posts and the older lists book pictures if you want!