This is a remarkably well-written, chilling and aching thriller portraying danger in secrets of  turbulent events of the Vietnamese War.
Laos File (The Shake Davis Series)
by Dale Dye 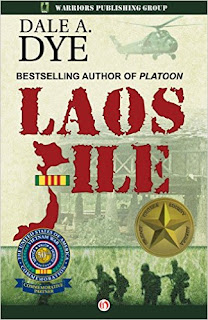 Military Writers Society of America 2011 Book Award winner: From the bestselling author of Platoon comes a military thriller about one Marine’s quest to leave no POW behind.
The death of a salty old senior noncommissioned officer who ran special operations in Vietnam leads US Marine Gunner Shake Davis on a shocking and potentially lethal mission to find out what happened to hundreds of American prisoners of war. Written by bestselling author Dale A. Dye and based on Oliver Stone’s classic film.
With “plenty of action and lots of military detail” (Vietnam Veterans of America), Laos File is a great read for fans of Tom Clancy and W. E. B. Griffin.


Review:
US Marine Gunner Shake Davis served as a gunner in Vietnam when he was barely out of his teens. He has never forgotten the fear when he faced a young enemy in a bunker as they fought hand to hand. Shake never planned to return but fate has different plans. Shake stayed with his commanding officer as he died in a remote cabin. After burying the man, Shake begins to call family and authorities to advise of the passing. He soon learns that his longtime friend had secrets, including a tour with the CIA. Also two of the commander’s family members advise that, having received news of the death, they are following instructions to mail packages to Shake.

The material that Shake receives has him postponing retirement and setting out to determine what happened to hundreds of American prisoners of war who never made it out of Vietnam and remain unaccounted for all these years later. Among the missing was his old friend’s only son. Now Shake has been given a last mission: find the rumored “Laos File” that tells what happened to the 200+ soldiers who disappeared as they were being marched toward prisoner exchange.

Shake drives his daughter to Miami to get her settled in college before he leaves on this new mission. When Shake is attack in a concert crowd he begins to suspect that someone does not want him researching the facts. Shake is pulled onto a team that is headed to Vietnam to make ‘reparations.’ As he proceeds, Shake quickly discovers that the Miami attack will not be the last of the assassination attempts he will have to dodge. Shake gets support from a young female officer among the team, not realizing that she is keeping secrets too.

Although it started a bit slowly, I enjoyed the writing style which consists of wonderful wording prose and yet is direct and distinct, fitting the sound of a gruff soldier. I was soon drawn into the story and placed in the scenes and amidst the fast paced action by the strong visuals painted by the author. The author blends current and past reminisces for Shake and for another character, Minh, a Vietnamese man. About a third of the way in the pasts of the characters intersect. From there the paths of Shake and Minh are on a collision course for a traumatic meeting.

There is rough language – again consistent with a salty Marine and adding to the authenticity of the story. The recounting of the struggles, fears and horror of the young soldiers during the Vietnam War are chilling and the mental scars, as well as physical scars, of the characters are aching. I found the presentation utterly remarkable and engrossing. At the conclusion of the book there is a brief biography of the author that is impressive and supports the first hand atmosphere conveyed in the story. I highly recommend this military thriller and I plan to look for more intense stories by Mr. Dye.


I received this through NetGalley for an honest review. This qualifies for my NetGalley Challenge and "L" in my Alphabet Soup Challenge.
Posted by Martha Eskuchen at 11:09 PM