This story jumps into motion and doesn’t slow down as it speeds along with intense action and emotion. 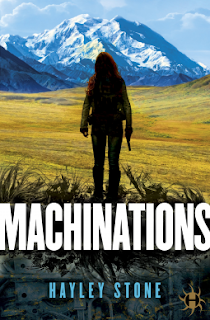 Perfect for fans of Robopocalypse, this action-packed science-fiction debut introduces a chilling future and an unforgettable heroine with a powerful role to play in the battle for humanity’s survival.
The machines have risen, but not out of malice. They were simply following a command: to stop the endless wars that have plagued the world throughout history. Their solution was perfectly logical. To end the fighting, they decided to end the human race.
A potent symbol of the resistance, Rhona Long has served on the front lines of the conflict since the first Machinations began—until she is killed during a rescue mission gone wrong. Now Rhona awakens to find herself transported to a new body, complete with her DNA, her personality, even her memories. She is a clone . . . of herself.
Trapped in the shadow of the life she once knew, the reincarnated Rhona must find her place among old friends and newfound enemies—and quickly. For the machines are inching closer to exterminating humans for good. And only Rhona, whoever she is now, can save them.


Review:
The computers were given a command to stop the fighting around the world. Their solution was to eliminate the humans. Now Rhona Long has become the symbol of the resistance, even if she hadn’t planned it. As this story opens, Rhona suffers a fatal injury on the front lines and is dying in the arms of the man she loves, Camus.

Rhona awakens with her best friend, Samuel, who was the scientist she trusted with her secret orders – to clone her in the event of death! Samuel and a warrior of a man, Ulrich, have to pull Rhona out of stasis and escape the lab before the machines capture them and kill her…again. Ulrich stays behind to give Samuel and Rhona the chance to escape. They are rescued and returned to the main base where the council questions who Rhona is and whether she can be trusted.

Rhona slowly begins to remember her past but quickly remembers her feelings for Camus. Although he is willing to maintain the charade of their affection, he resents the Rhona clone and resists any true feelings towards her. After all, it has taken six months to bury his grief over Rhona’s death. This emotional upheaval has to take place in the background anyway as at least one person on base is openly hostile towards Rhona. The can protect Rhona from the known threat but the secret saboteur is a different story.

Meanwhile, a neighboring base calls on Rhona’s base for help as the Machines have discovered their location and are attacking. Camus goes on the rescue mission which quickly becomes a trap. Now only Rhona’s fast thinking and decisive action can save the man she loves, … not to mention the remaining humans.

I really enjoyed the non-stop, intense action and emotion in this story. The premise is very interesting and makes you wonder: could you, would you, love a clone of your loved one? I liked the well-developed characters, including nerdy Samuel, brusque Ulrich and sweet Hanna who lost her hearing during an attack and speaks primarily in sign language. I recommend this to readers who like end of the world as we know it scenarios with lots of action. I would like to read more by this author and in this series if it continues.


I received this from the publisher through NetGalley. The title released July 26, 2016. This qualifies for my NetGalley Challenge.