This is an engaging character driven, post-apocalyptic scenario, pitting good and evil. 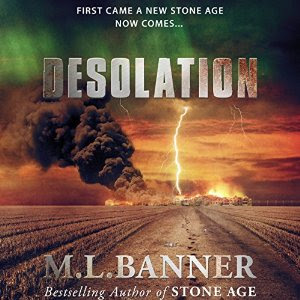 Publisher's Summary
A world devastated: a sky filled with magical auroras at night and deadly radiation during the day; technology all but gone; hundreds of millions dead by fire, starvation, disease, and violence. The survivors will have to face their own desolation.
Three groups struggle to endure and hold onto what little they have, while others will do anything to take it all. On a beach in Mexico, a small town in Wyoming, and a rural ranch in Illinois, epic battles between good and evil will be fought. Winners will have to face forces of nature never seen before.
But, there is a dim light on the horizon. A 150-year-old secret may lead the lucky few to a place that holds the promise of a new future, unless the sun doesn't set on humanity first.
This is the stunning follow-up to the #1 Amazon best seller Stone Age.
©2014 Toes in the Water Publishing, LLC (P)2015 Toes in the Water Publishing, LLC


Review:
A solar flare has devastated the world as we know it. Electronic technology is gone, the cities are in flames and conductive surfaces, such as water, continue to give off electrocuting charges. Many are dying from starvation and disease, not to mention violence as people sink to thievery and worse trying to protect themselves and obtain food for their families.

Maxwell Thomas is a wealthy man who was prepared for the disaster. He had several homes and escape plans. He even knows of a secret community, Cicada, where the scientists were to gather for survival. Unfortunately Max has been ‘commandeered’ by a drug cartel with some vicious members. He must escape and get back to Bill and Lisa King in a resort community in Mexico.

Bill and Lisa have supplies thanks to their good friend, Max. They are willing to help others in their community until neighbors try to take the supplies by force.

Far away, in Illinois, “the Teacher” leads a religious group of followers. He has gathered an army of men to protect him and provide the basic needs of shelter, food and water for the crowd that follows. Since their supply is limited they conscript the followers to work, including attacking communities along their path to fill the needs of the cult.

College student, Darla King and her younger brother, Danny are walking away from the fires of Chicago, trying to get to their grandparents’ home in Michigan. It is a dangerous world to be traveling as wicked men are willing to rape and murder and steal the resources that are found along the way. After several attacks and difficult escapes, Darla and Danny stumble into the cult crowd. Darla quickly learns that crowds are not always safe.

Steve Parkington, Darla’s boy interest, and his father have crashed in their small plane. They find themselves with a small group of survivors on a well-stocked and protected ranch, known as Wright ranch.

In Nebraska, Maggie, an astronaut and scientist, becomes the sole survivor of a space capsule crash. Now she must fend for herself in a hot and hostile world. Along the way she will rescue and be aided by another scientist who is traveling by bicycle to get to Cicada.

I was quickly engaged by the good characters and their battle against the evil forces. I liked the excellent story telling writing style which pulled me in and made me care about the characters. The author shifts among the scenes until the people and groups converge.There seemed to be a few loose ends but I still was engaged and enjoyed the tale.

I did not realize this was a second book in a series until I started it. I wish I had read/listened to them in order but still this was good but I could tell that I missed some character build up as well as the initial disaster. I will want to pick up the first book and I am also interested in the Cicada series that follows these events even if it is set years later.

Audio Notes: Mikael Naramore does a good job with the various voices and the emotional energy of the story.  He also delivers the narrative with strong, appropriate pacing. The narration made this an easy and engaging listen, enhancing the story.


I received this audio from the publisher through Audiobook Jukebox.
Posted by Martha Eskuchen at 9:59 PM