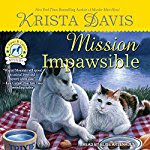 
Publisher's Summary
Holly Miller and her grandmother, Oma, are working their tails off to prepare the Sugar Maple Inn for an upcoming matchmaking event for pet owners. While Holly has no interest in pairing up, Oma plans on playing Cupid and finding someone to warm her reluctant granddaughter's heart. Unfortunately, one man Holly does meet is cold - dead cold - and he has a personal letter from Oma in his pocket. As suspicion is cast over the inn's guests, Holly - with the help of her furry friends, Trixie the Jack Russell and Twinkletoes the cat - must fetch the real killer, or she may soon have a date in court.
©2017 Cristina Ryplansky (P)2017 Tantor


Review:
This is a very easy and enjoyable listen. I really enjoyed the involvement and mischief of the pets. The human characters have some quirky traits that add interest and a little intrigue. This is the fourth story in the series but reads fine as a standalone.

Holly is helping run her grandmother’s inn, the Sugar Maple Inn set in Wagtail, Virginia. Wagtail is aptly named as they love their four-legged friends. The Inn is hosting a special week-end Animal Attraction Matchmaking event for pet owners. The rather eccentric matchmaker, Macon, is convinced that animals often pull people together. Holly isn’t interested in being matched but her grandmother, Oma, has filled out a form for Holly so she gets pulled into the matchmaking. Holly’s dog, Trixie, makes fast friends with Cooper and his owner, John. John shows interest in Holly until they stumble on a dead body.

Holly is helping her friend, Zelda, to sneak out without her stalking ex, Hank, seeing her but someone sees Holly sneaking around the house. This is not good when the next morning Holly finds Hank’s bashed body under the trees.

Initially Zelda is a suspect but then circumstantial evidence shifts to point to Holly. Holly has worked with the local Detective, Officer Dave and she is a bit put out that she is a suspect and he won’t share any information with her. Still it seems that Holly’s efforts to investigate get her deeper into trouble.

There are various suspects floating around the Inn. Nessie and Sky are two late arrivals who are attending to keep track of their daughters who are participating in the event. It turns out that one of the ladies is the sister in law to the first dead man, a psychologist, Dr. Randall Donovan. Donavan had been rather unpleasant when checking in and had bad-mouthed Macon as a charlatan matchmaker. There is also cause for the local pharmacist to dislike Donovan.

As if Holly isn’t busy enough, her own ex-boyfriend, Ben, who is not a big fan of pets, has shown up with a borrowed adoption dog, Huey, a sweet and lovable dog, to participate in the matchmaking. It seems Ben may be leaving the door open as a gathering of dogs and cats are breaking into the pantry.

This is great fun following the antics of the animals while trying to figure out who the killer is and what the motives are. I recommend this to readers who enjoy cozy mysteries and animals as part of the story.

Audio Notes: Elise Arsenault is a new narrator for me. She does a nice job with the characters, conveying the fun of the story. The narration made this a quick, easy experience for me.


I received this from the publisher through Audiobook Jukebox. It qualifies for Audiobook Challenge.
Posted by Martha Eskuchen at 11:05 PM