This is a lovely read! 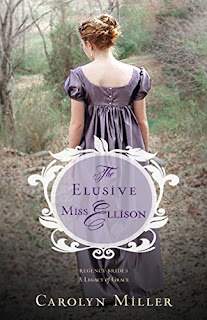 Handsome appearance counts for naught unless matched by good character and actions.
That's the firm opinion of not-so-meek minister's daughter Lavinia Ellison. So even though all the other villagers of St. Hampton Heath are swooning over the newly returned seventh Earl of Hawkesbury, she is not impressed. If a man won't take his responsibilities seriously and help those who are supposed to be able to depend on him, he deserves no respect from her. In Lavinia's pretty, gray eyes, Nicholas Stamford is just as arrogant and reckless as his brother--who stole the most important person in Livvie's world.
Nicholas is weighed down by his own guilt and responsibility, by the pain his careless brother caused, and by the legacy of war he's just left. This quick visit home to St. Hampton Heath will be just long enough to ease a small part of that burden. Asking him to bother with the lives of the villagers when there's already a bailiff on the job is simply too much to expect.
That is, until the hoydenish, intelligent, and very opinionated Miss Ellison challenges him to see past his pain and pride. With her angelic voice in his head, he may even be beginning to care. But his isn't the only heart that needs to change.
These two lonely hearts may each have something the other needs. But with society's opposition, ancestral obligations, and a shocking family secret, there may be too many obstacles in their way.
Fans of Georgette Heyer, Lori Wick, and Julie Klassen will enjoy the spirited exchanges between the bluestocking minister's daughter and the bruised war hero as they move past pride and presumption to a humbled appreciation of God's grace and the true strength of love.


Review:
Miss Ellison, a country minister’s daughter, is the heart of kindness and service in her community. That doesn’t mean she is meek as she is strong willed and tends to be outspoken. At “three and twenty” she has a few local gentlemen interested in her but she has no interest in them. She figures she will end up an old maid like Aunt Patience, her mother’s sister, who moved in to take care of them when her mother died. Lavinia’s mother died of a tragic accident when Lavinia was only nine. She has never forgotten the wealthy, reckless neighbors who raced their horses and caused her mother’s death. Now the brother of that reckless boy has inherited Hampton Hall and returned to take charge over the estate. Lavinia is not impressed by his handsome good looks and arrogant airs but she is prepared to approach him with her list of grievances on behalf of the estate tenants.

Nicholas Stamford, a former army Captain, never expected to become seventh Earl of Hawkesbury. Still, he is glad for the chance to get away from the eager mothers and daughters in London. They see him as a good catch and they do not realize that he will have to marry for money to rebuild the treasury that has been depleted by his father and brother. Nicholas doesn’t initially recognize Lavinia as the young girl who lost her mother that dreadful day many years ago. He has apologized to her father but finds it difficult to give an apology to the very prickly Miss Ellison.

The two start off at odds, rubbing each other the wrong way, but it is clear they are drawn to each other’s intelligent wit. Lavinia’s caring nature impacts Nicholas more than words might. As his household cares for her when she suffers illness, he slowly begins to turn his heart to the people of his estate and village, and to the God that has provided so much for him.

Lavinia knows she isn’t in the Earl’s league and shouldn’t allow her heart to dream of anything developing even though the Earl seeks her out to share her company. When Nicolas’ high maintenance mother arrives at the Hall with prospective bride in hand she makes it quite clear that Lavinia would never do for her son. Lavinia mishears a statement and is told some gossip that shatters her reluctant dreams.

Lavinia’s Aunt decides to step in to change matters when it becomes apparent that Lavinia has lost her sparkle. Aunt Patience has surprises to reveal that will completely change Lavinia’s life... but not her servant's heart.

I totally enjoyed these characters and the slow growth of friendship and affection. The obstacles were obvious but I was sure there would be a way around them. Even Lavinia notes at one point that “Our Father has good plans…” The faith comments and messages are shared beautifully and naturally in the discussions. The story shares a message of forgiveness and grace that warmed my heart. I recommend this to readers who enjoy a gentle historical romance and who would be warmed by faith lessons shared and learned.

I received this from the publisher through NetGalley. It qualifies for my NetGalley Challenge.
Posted by Martha Eskuchen at 5:30 AM