Audible Book Review: Into the Black: Odyssey One by Evan Currie

This is an engaging first contact, space military adventure.
Into the Black: Odyssey One
Written by: Evan Currie
Narrated by: Benjamin L. Darcie 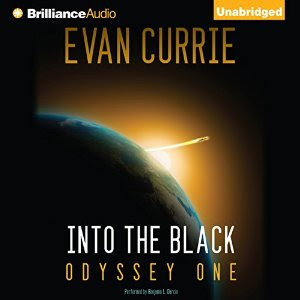 Publisher's Summary
Beyond the confines of our small world, far from the glow of our star, lie a galaxy and universe much larger and more varied than anyone on Earth can possibly imagine. For the new NAC spacecraft Odyssey and her crew, the unimaginable facets of this untouched world are about to become reality. The Odyssey's maiden voyage is an epic adventure destined to make history.
Captain Eric Weston and his crew encounter horrors, wonders, monsters, and people; all of which will test their resolve, challenge their abilities, and put in sharp relief what is necessary to be a hero.
A first-rate military-science-fiction epic that combines old-school space opera and modern storytelling, Into the Black: Odyssey One is a riveting, exhilarating adventure with vivid details, rich mythology, and relentless pacing.
©2012 Evan Currie (P)2012 Brilliance Audio, Inc.


Review:
The Odyssey is the first spacecraft sent out from earth with a crew culled from the best of the best. They were really on a test mission, intended to see what the Odyssey can manage and do a little exploring beyond the Solar System. They didn’t plan upon warping into the debris of a devastating battle…and rescuing a survivor. Now they know there are other human races in the universe… and other unknown, and apparently brutal, alien beings.

Captain Weston is new to the position of North American Confederation (NAC) spaceship captain but he is a battle experienced pilot having led the legendary Archangel Flight Group, the specialized fighter units. Weston tries to return their rescued passenger to her nearest planet world only to find an unimaginable situation. Now he must decide if he jumps out of this galaxy to return home or flies into a battle that isn’t their business… or is it?

The characters are likeable and I wasn’t bothered by some familiarity among the ranks that wouldn’t be expected in a real military protocols. The other galaxy human characters have different backgrounds, views and technology that make the interaction interesting. The space travel tachyon (dissolving and restoring particles) is creepy and pretty disturbing, even to the characters. It wasn’t quite clear to me if the alien species is tech or ‘insect’ but their behaviors were engaging, if devastating.

The story moves at a good pace with action and mystery pulling my interest. I admit I spent a couple of nights listening later than I should. I recommend this as a fun, action packed ride to readers who like space opera and first contact genre.

Audio Notes: Benjamin L. Darcie does a nice job with the narration. He presents varied voices and captures the feel of the different characters. The narration moves at a good pace and enhanced my enjoyment of the story.


I picked this from my Audible TBR shelf for Mount TBR, Audiobook Challenge, and "I" in my Alphabet Challenge.
Posted by Martha Eskuchen at 9:54 PM