Book Review: The Duke needs a Wife: The Belles of Bath by Katy Walters

This steamy regency romance has a decent plot and reads easily.

The Duke needs a Wife: The Belles of Bath
by Katy Walters 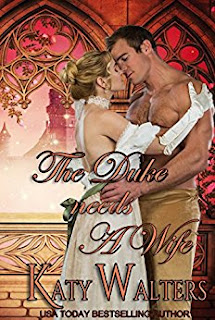 On the untimely demise of her parents, Miss Cassandra Whitney endures abject poverty raising her siblings. She faces further torment as her landlord, the odious Baron Scudder, threatens her with eviction, if she refuses to assent to his offer of marriage to her younger sister Belle. As Cassandra fights to save her family, she inherits a titled estate and a ruin of a castle.
News of Casandra’s inheritance travels fast, reaching the highest circles in the ton. The Dowager Duchess of Taunton immediately sees her as a worthy match for her son Maximillian the 6th Duke of Taunton a renowned rakehell. The dowager also plans to take control over the castle which would be a prestigious venue for her many balls and hunting weekends. However, neither Cassandra nor Maximillian has any desire to wed. The Duke is more than inclined to enjoy his various mistresses without the entanglement of matrimony; besides his time is mainly caught up with horses, gaming and his club. What with her siblings, the estate and a ruin of a castle to renovate Cassandra could not possibly entertain the idea of courtship.
Both did not anticipate the manipulative powers of the dowager who slyly arranges a meeting between them.
On seeing Cassandra, Max is suitably impressed with her wit and ironic humour. Already tiring of one of his mistresses, she would be a welcome replacement. Although charmed with his handsome looks and seductive overtures, Cassandra puts him firmly in his place.
Can Cassandra resist the devilish overtures of the Duke and the devious ploys of the dowager?


Review:
This regency is a bit racier than I like. Cassandra is a lovely character but Max is a gritty rake.
Cassandra and her siblings are barely making ends meet after their parents have both died. The greedy, loathsome nobleman who owns their humble home is insistent on marrying Cassandra’s beautiful sister, Belle. Belle has no interest in Baron Scudder as she is affianced to her childhood sweetheart, Jack, one of the farmers. Cassie inherits a castle and determines that many of the ill-treated famer tenants and villages should move to the castle to help her set up house and estate, leaving a furious Baron behind.

Maximillian, the 6th Duke of Taunton, is a renowned rakehell with multiple mistresses and no interest in finding a wife. His mother, The Dowager Duchess of Taunton, thinks it’s time for Max to take a wife and she thinks a humble young lady who has inherited a historic castle would make a perfect bride. Particularly since the Dowager wants to get control of the castle so she can invite and impress her ton friends. The Dowager connives to have Max travel with her to the castle where she invites herself, and entourage, to stay.

Max and Cassie can see the machinations of the Dowager but they are hard pressed to stay out of her way. Although Cassie hadn’t planned to marry as she describes herself as a “butterball”. Max finds her voluptuous curves enticing. Although he is crude and aggressive, he has promised not to take Cassie’s virginity until she asks him.

Max and Cassie grow in friendship as they work together to renovate the castle. But Baron Scudder is still chasing Belle and objecting to the removal of the farmers and villagers. This creates danger and tension that puts Max in the position to protect Cassie and her sister.

Although Cassie is immediately likeable, I can’t say the same for Max. Max is introduced as a crass, almost vulgar, womanizer. I’ve read many historical romances with rakehells and I prefer those who still show a sense of gentlemanliness, especially around innocents. Other than the crass attitude and steamy interludes, the plot, with interfering mother and revengeful suitor, is reasonable and engaging. Although this is more gritty than I like for this genre, those who like steamy regencies might want to try this.


I received this from Pump Up Your Book Campaign for review.
Posted by Martha Eskuchen at 9:33 PM