The Detective: A Nathan McNamara Story (The Soul Summoner)
by Elicia Hyder 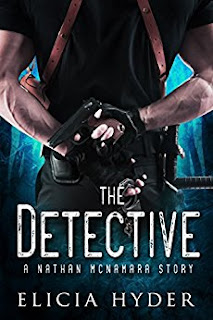 Robbery, arson, murder...and the one night stand that just won't end.
With eleven missing women to find and six high-profile burglary cases to solve, the last thing Detective Nathan McNamara needs in his life is one more complication. And that’s exactly what his recent one-night stand is becoming—complicated. With his heinous lieutenant breathing down his neck for answers and his accidental girlfriend dropping hints for a commitment, Nathan is realizing that his career and his bachelor status are both on the line.
When the burglary cases suddenly escalate to homicide, Nathan must put everything else aside to stop the killer. But this is easier said than done when the blonde from the bar repeatedly shows up at his doorstep and enlists his own mother against him. Now he’s more convinced than ever that his job hangs in the balance and that the Surgeon General’s warning on the whiskey bottle should include something about women.
***Detective Nathan McNamara is one of the leading men in The Soul Summoner Series. Book One, The Soul Summoner (a full-length novel), focuses on the investigation of the eleven missing girls. Chronologically, this novella happens before the series begins, but it is a standalone and doesn't have to be read in order.***


Review:
I met the very attractive (okay, -- "yummy" is a better description) Detective Nathan McNamara in The Soul Summoner. This short story fills in his history and how he got involved with Shannon, his stalking girlfriend in the next book.

Nate is ducking his unpleasant superior while pursuing the investigation of a rash of robberies. The criminals left a victim at one of the scenes, turning the case into a homicide investigation. Nate is relentless in his efforts despite the negative attitude of his lieutenant. In his spare time Nate is working on a case with eleven missing women. This case is a special burden for him.

I enjoyed Nate’s family background and input. I didn’t enjoy his ‘accidental’ relationship with Shannon. He initially picks her up at a bar and then takes advantage of the open invitation. Shannon follows him to his town, calls his mother to make connections and repeatedly calls him even as he makes it clear he has work to do. Instead of putting a halt to the eager chase he lets her carry on, and I didn’t like that.

I did like how Nate worked the case and I like the direct writing style. Written in first person from Nate’s view gives it a hands-on approach. I think I would have liked to have read this before The Soul Summoner but I still liked it well enough. This does not have the paranormal elements that show up in the rest of the series. I want to continue with book 2, The Siren, and I recommend these be read in order.


I received this title through InstaFreebies. It qualifies for my TBR Challenge.
Posted by Martha Eskuchen at 9:00 PM