This is a fun contemporary romance with the plus of a mystery and touch of danger. 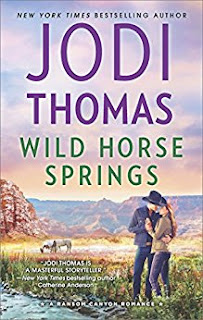 In the heart of Ransom Canyon, sometimes the right match for a lonely soul is the one you least expect
Dan Brigman may not lead the most exciting life, but he's proud of what he's achieved: he's a respected lawman, and he's raised a bright, talented daughter on his own. But finding a lone, sparkly blue boot in the middle of a deserted highway gets him thinking maybe the cowgirl who lost it is exactly the shake-up he needs.
After losing her baby girl, Brandi Malone felt like her soul died along with her daughter. Now singing in small-town bars to make ends meet, she's fine being a drifter—until a handsome sheriff makes her believe that parking her boots under his bed is a better option.
College grad Lauren Brigman has just struck out on her own in downtown Dallas when a troubling phone call leads her back home to Crossroads. Her hometown represents her family, friends and deepest hopes, but also her first love, Lucas Reyes. Will Lauren's homecoming be another heartbreak, or a second chance for her and Lucas?


Review:
This is a fun, easy read, small town romance. Dan is a great character who brought smiles to my face from the very first pages.

Dan is a respectable lawman whose wife walked out on him years ago. At least he had his wonderful daughter, Lauren, to watch over, raising her on his own and even allowing her to study and work at the sheriff’s office. Dan hasn’t had much to do with women since. When he finds a sparkly, fancy cowgirl boot in the road he wonders what it would be like to meet the kind of wild woman who would wear those boots. He tracks her down and finds Brandi Malone mesmerizing the locals with her singing in a local tavern. It is lust, if not love, at first side.

Thatcher, a young man who has been adopted by the town as an abandoned boy, has been accused of shop lifting and assault. He didn’t steal the groceries but was really returning them. But he did punch the grocer and he is not going to tell the sheriff the rest of the story. Lauren gets word that Thatcher is in jail and feels she must come home to watch over him and get matters straightened out. Because things look dicey, Lauren calls on the one lawyer she is sure she can count on, at least for law, if not for commitment. Lucas is a successful lawyer but was Lauren’s cowboy, high school sweetheart before college and life took them on separate paths. There is still a strong ember between them but they are both a little gun-shy feeling abandoned by the other.

Cody Winslow is haunted by his last gun fight as a Texas Ranger. He has not been able to out run his demons and nightmares. Riding hard along the canyon at night he ends up thrown from his horse into the canyon. Lucky for him, Tess, a park ranger, and her handful of 5 and 6 year old campers, find him and get him aid. Now Tess is taking charge of his house while he is healing in the hospital and Cody is thinking he might have something to live for if he can just keep hold of this bossy, strong minded woman.

All three character lines converge as the book progresses and drug thugs try to kidnap Thatcher from jail. Thatcher is actually protecting a little girl but didn’t want to tell Dan about it until it was clear the child is in more danger.

I have read historical romances by Ms. Thomas and enjoyed them a lot. She writes with reasonable, well flowing plots that include a little mystery, a good dose of humor, likeable characters and sweet to sassy romance. I was, of course, rooting for the HEA for Dan and Brandi, Cody and Tess, and Lauren and Lucas. The relationships that resolve are sweet and heartwarming. I recommend this as a fun romance for readers of contemporary romance and for mystery readers who like romance.


I received this from the publisher through NetGalley; it qualifies for my NetGalley Challenge.
Posted by Martha Eskuchen at 10:22 PM