Audible Review: The Curse of Tenth Grave: A Novel by Darynda Jones

This series is fun listening, although this one got a bit edgy for my tastes.
The Curse of Tenth Grave: A Novel
Written by: Darynda Jones
Narrated by: Lorelei King 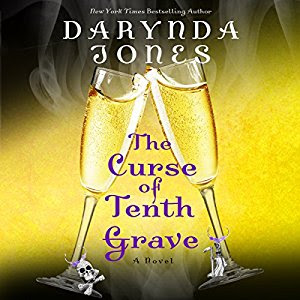 Publisher's Summary
"If one door closes and another one opens, your house is probably haunted." (Bumper sticker)
As a part-time PI and full-time grim reaper, Charley Davidson has asked a lot of questions throughout her life: Why can I see dead people? Who is the hot supernatural entity following me? How do I get gum out of my sister's hair before she wakes up? But "how do I trap not one malevolent god but three?" was never among them. Until now. And since those gods are on earth to kill her daughter, she has little choice but to track them down, trap them, and cast them from this dimension.
There's just one problem. One of the three stole her heart a very long time ago. Can the Razer, a god of absolute death and destruction, change his omniscient spots, or will his allegiances lie with his brothers?
Those are just a few of the questions Charley must answer, and quick. Add to that a homeless girl running for her life, an innocent man who's been charged with murdering the daughter of a degenerate gambler, and a pendant made from god glass that has the entire supernatural world in an uproar, and Charley has her hands full. If she can manage to take care of the whole world-destroying gods thing, we're saved. If not, well...
©2016 Darynda Jones (P)2016 Macmillan Audio


Review:
I enjoy Charley’s intense, sassy character and the smokin’ (in more ways than one) chemistry between Reyes and her. This episode starts with tension between them as Charley has found out secrets about Reyes and he seems to be keeping secrets from her too. Word that their daughter “Beep” (Elwyn) is in danger doesn’t help when it sends Charley into a murderous panic.

Meanwhile Charley has been called in to consult on a murder case by none other than the prosecuting attorney (PA). Although all the very bloody evidence points to the accused, the PA is sure he isn’t guilty and he will do his best to get the man off the charges. That means he needs Charley’s to 'do her thing' and find the real murderer.

As Charley spots a young girl who is hiding on the streets. This one isn’t a ghost but she might become one if Charley can’t protect her from what appears to be a curse -- or ill deeds -- at a local children’s home where children are dying in unreasonable numbers.

As usual Ms. Jones skillfully weaves three lines of ‘mystery’ at a time. Clues and dangers keep Charley moving at a fast pace. The overall story moves forward with some sorrow and rage that could tear things apart. I like how Ms. Jones pulls in the secondary characters (Osh, Garret, Rocket, Agent Carson, Artemis and others) so they each get some reader time. And I love the fun memes/bumper stickers and quotes that start each chapter.

Audio Notes: I can’t praise Lorelei King’s narration enough. She has helped to make these characters come alive and I love listening to her performance. It is an awesome experience (when not jarred by the issues that bothered me).


I pulled this in from my Audible TBR Shelf for Mount TBR, Audible Challenge and "C" in Alphabet Challenge.

My Reviews for Books 1 through 9 can be found through THIS LINK.
Posted by Martha Eskuchen at 11:38 PM