Audible Book Review: The Days of Noah: Book One: Conspiracy by Mark Goodwin

This is an interesting story full of political conspiracies and a compelling view of what could happen in America in the near future.
The Days of Noah: Book One: Conspiracy
Written by: Mark Goodwin
Narrated by: Kevin Pierce 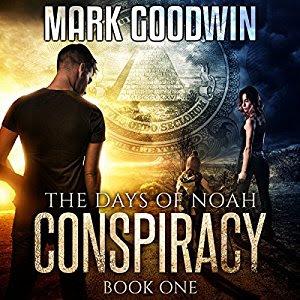 Publisher's Summary
Could we be living in a time of which there is more prophetic writings than of any period in history? Noah Parker, like many in the United States, has been asleep at the wheel. During his complacency, the founding precepts of America have been slowly, systematically destroyed by a conspiracy that dates back hundreds of years. The signs can no longer be ignored and Noah is forced to pull his head out of the sand and see things for what they really are. Has his awakening come too late or can he and those around him reclaim the freedoms and principles which have been lost? Watch through the eyes of Noah Parker and his family as a global empire takes shape, ancient writings are fulfilled and the last days fall upon the once great, United States of America. The Days of Noah, Book One: Conspiracy is a fast paced fiction thriller which looks at how modern conspiracies might play into Biblical prophecy about the end times.
©2014 Goodwin America Corp. (P)2014 Goodwin America Corp.


Review:
I had been eyeing Mr. Goodwin’s work for a while and I am glad to have listened to this. The story follows two lines of characters to present a plausible theory of government manipulation by a secret group of powerful players.

Noah and his wife, Cassie, are Christian believers living fairly normal lives. He is a teacher and she works with a newspaper while homeschooling their seven-year old daughter, Lacy. Cassie has a strong belief that freedoms are being encroached on and will only become more limited. She is a 'prepper' planning with food stores, guns and some investments in precious metals. The couple belong to a small group from their church and many of them are quiet preppers too.

One day Noah’s students are discussing demolition and the possibilities that the 9/11 bombings were set internally and not a terrorist attack. Another day the forbidden topic of creation is raised in Noah’s class room. Noah merely states that some people believe that creation is a sounder ‘theory” than evolution. Noah is arrested for violating the government course curriculum restrictions.

While friends step forward to help bail Noah out of jail, authorities force their way into his home in a traumatic scene, killing their dog, confiscating guns and computers and placing Lacy in the clutches of a social services officer. Some of the officers realize that the government has gone too far and they quit their positions to support Noah and Cassie. Church friends find a good lawyer to fight the criminal and parental abuse charges and they all help set up a protest against the officers who bullied Cassie.

The second line of the story follows Elliot as an Intelligence Officer with the CIA. Elliot’s job is to monitor unusual purchases of firearms, ammunition, long term food storage, tactical supplies, gold and silver and components for explosives. Elliot reports some concerns regarding cryptocurrency purchases to his supervisor, John Jones. Although Jones downplays Elliot’s concerns he soon starts meeting with Elliot in secret and telling him to prepare for drastic changes.

I have read other near future, ‘America in crisis’ stories but most did not have the extent of conspiracy theories this book presents. The author creates likeable characters and I was pulled into the good pacing of events while rooting for the protagonists. I liked the combination of the faith beliefs and the all too plausible political possibilities. I recommend this to others who are interested in erosion of American freedoms and possible events leading up to end of the world times, or at least end of the world as we know it.

Audio Notes: Kevin Pierce has become one of the “go to” narrators for sci fi and prepper stories. Pierce does a solid job narrating the characters so, after a rather slow beginning, they become real, placing the listener in the story. I enjoyed listening to this story and look forward to more in the series.


I chose this from my Audible shelves for TBR challenge, Audio Book Challenge for "D" in Alphabet Soup Challenge.
Posted by Martha Eskuchen at 10:21 PM