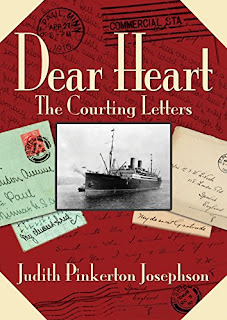 In 2010 teacher Lisa Anderson has almost given up on love after a failed, longtime relationship and Internet dating disasters. In a cluttered attic, she discovers an antique writing box labeled “Courting Letters.” Untying the beribboned packets inside, she finds tattered envelopes, their contents penned more than a century before. As Lisa begins to read, she learns that in 1907 in Ipswich, England, the authors, Gertie and Fred, meet. Just as their friendship deepens into something more, Fred and his family emigrate to America in search of a better life. Hopes for the budding relationship fade. Long months pass. Then a letter from Fred to Gertie arrives. The two begin a dance of written words, but the romance is fraught with obstacles, not the least of which is the Atlantic Ocean. Separation and distance also conspire against Lisa when her intriguing new beau must return to his native Spain. Dear Heart: The Courting Letters weaves a tapestry from two intersecting love stories. Will the threads hold or pull apart?


Review:
Lisa Anderson is a school teacher in her mid-thirties. She has mostly moved on from a longtime relationship that ended with her beau saying something like ‘I’m not interested anymore’. Lisa’s mother has recently died so Lisa is cleaning out her mother’s house to prepare it for sale. Lisa finds an antique writing box in the attic that is full of “courting letters”. Lisa doesn’t recognize the names of the writers but she soon becomes enchanted with their courtship through letters.

Gertie and Fred met in England near the turn of the century. Fred moved to Chicago to help find work for his younger brothers and himself. He was sad to leave Gertie behind but he had a duty to take care of his family. Still, he had never met anyone like Gertie and he couldn’t help but write to her, sharing his sentimental musings keeping her advised of his activities.

Gertie was a young woman of 35 who spent her years helping in the family business. After her father died, Gertie helped her frail mother take care of their home as a boarding house. Gertie had thought a relationship was developing with Fred but then he announced he was moving to America. Gertie is ensnared with Fred’s sensitive prose and sharing through his letters. She has boarders who show interest in her but she still has dreams of Fred. Gertie must decide if she should accept an offer of marriage rather than continue to wait for Fred who has never spoken for her hand.

Unexpectedly Lisa meets a good-looking man and they discover common interests and mutual attraction. Things are developing nicely until he stops coming by and calling. He doesn’t answer her calls either. Lisa tries to overcome her new disappointment. Meanwhile, Lisa is sure there aren’t gentle, poetic men like Fred anymore and she wonders who this couple were and what happened to them.

This is a sample photo from the
collection of Francis Frith at francisfrith.com.

The letter courtship is charming and the story shares wonderful word images of the times and places. There are lovely illustrations along with postcards and photography of the settings shared which add to the interest. This is not an action story but it has a gentle, quaint charm in the presentation through the letters. I enjoyed Lisa’s struggles and triumph in romance too. I recommend this to readers who enjoy sweet, gentle romance.


I received this title through NetGalley. It qualifies for my NetGalley Challenge.
Posted by Martha Eskuchen at 11:30 AM