Happy Friday!
This has been a crazy week at work playing catch-up and juggling now that Heather is on vacation.
I hope to pull together another set of books for next week and if I get out to get my haircut I hope to buy a new camera too.

Thank you to all who entered the June 2 Pick. There were TWO automatic wins this week. Automatic wins are those who requested the book four times without other people asking for that book during those weeks. There were no blocks this week.
ELIZABETH gets Snowbound with Mr. Right
and BECKY gets Passions Treasure.


CONGRATULATIONS
to Random.org picked Winners from June 2 Pick:
LINDA gets a GC
LESLEYSAYS gets a GC 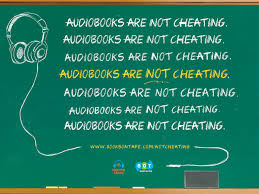 Another week of HAPPY AUDIOBOOK MONTH!
Image found at Books On Tape.


New Book Group #70 January 27, 2017
Thought I’d share some romances for February:
PAIRS:
Betty Neels: The Girl With Green Eyes and the Damsel in Green
Linda Howard: The Touch of Fire and Loving Forever
SINGLES:
The Devilish Pleasures of a Duke by Jillian Hunter
Kissed by Shadows (Get Connected Romances) by Jane Feather
Love's Brazen Fire by Betina Krahn
Winter Fire by Jo Beverly

I am happy to say that so far about 1,069+ books have found new homes! YAY. I have to update my print out to check the exact number sent out - a few were never claimed. I periodically update the lists - deleting those won. You can still go to the Friday Pick list link to see older posts and the older lists book pictures if you want!