Audible Book Review: The Zoo at the Edge of the World by Eric Kahn Gale

This is surprisingly engaging and thought provoking.

The Zoo at the Edge of the World
Written by: Eric Kahn Gale
Narrated by: Julian Elfer 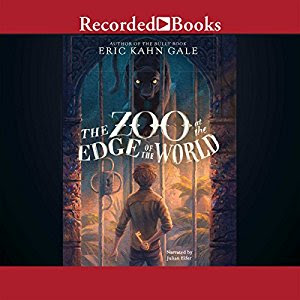 Publisher's Summary
Marlin is not slow or mute; he is a stutterer, and that makes it impossible for him to convince people otherwise. He is also a Rackham: the youngest son of the world-famous explorer Roland Rackham, who is the owner and proprietor of the Zoo at the Edge of the World, a resort where the well to do from all over the world can come to experience the last bit of the wild left in the world at the end of the nineteenth century.
In order to impress a powerful duke who comes to visit the zoo, Marlin's father ventures into the jungle and brings back a mysterious black jaguar, now the only one in captivity. Everyone is terrified of the jaguar, including Marlin - until one night when the jaguar confers upon him a powerful gift. Soon Marlin finds himself with a difficult choice to make and, finally, something to say. If only he can figure out how to say it.
©2014 Eric Kahn Gale (P)2015 Recorded Books


Review:
Marlin is a bright 11-12 year-old boy but people don’t realize it because he is an extreme stutterer. He can talk to animals when no human is around, but it is painful for him to try to speak to humans. At least his father accepts his difficulty, unlike his older brother, Tim, who taunts him and does everything to bully him.

The two boys are sons of Roland Rackham, a famous explorer who has established the Zoo at the Edge of the World resort. The zoo contains many dangerous jungle species behind cages made to keep the animals in but allow the wealthy guests to see them mostly in their habitat. Rackham struggles to keep the resort afloat financially although he won’t let anyone else know of his financial troubles. He has been trying to buy more land on the edge of British Guiana forest rather than allow sugar planters to take over and destroy the wild. One of his competitors for land is an old English ‘friend’, a wealthy duke, who is visiting the resort with his family. The duke’s real goal is to find a way to discredit Rackham and his business.

Rackham captures a black Jaguar and sets him in a cage to be a special exhibit. Everyone is afraid of the ‘man-eater’ cat. Marlin discovers the mysterious Jaguar is wise and magical. Jaguar bestows a special power on Marlin. The gift alone would change Marlin’s life but it also creates a special bond with the Jaguar. Rackham decides to create a one of a kind spectacle by pitting the cat against some other jungle creatures. Marlin can’t allow the confrontation to occur but his solution results in other troubles.

As the week of events progresses Marlin discovers secrets he wishes he didn’t know. Ultimately, he must make a choice to stand up and try to speak out. But will it be too late?

I wasn’t quite sure what to expect from this but I was quickly drawn into the story. I liked Marlin’s character and the friends he’s made and new friends made during the week. Marlin is kind to the animals even when not all of them are kind to him. He doesn’t set out to cause trouble but it dominoes. Each action tumbles forcing him to make hard decisions. The genre says 5-7 year old but apparently it is supposed to be 5th to 7th grade which is much more fitting. There are moral lessons to be pondered and that would make for great family discussion.

The story is well written with enjoyable descriptions. This was a surprisingly engaging and intriguing story. I note that the kindle and print versions have charming illustrations.

Audio Notes: Julian Elfer does a beautiful job of narrating. His accent works perfectly for Marlin, the edge of the world and the world of animals that comes alive. I totally enjoyed the audio although I imagine the illustrated version would be lovely too.


This is from my Audible TBR shelf. It qualifies for Audio Challenge, Mount TBR and "Z" in Alphabet Soup.
Posted by Martha Eskuchen at 11:00 PM