This is 'gritty' but wonderfully suspenseful and romantic.
Hunt the Dawn (Fatal Dreams Book 2)
by Abbie Roads 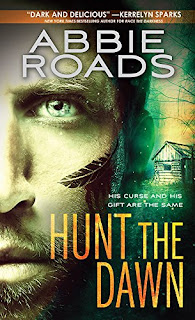 "Dark and delicious."—Kerrelyn Sparks, New York Times bestselling author on Race the Darkness
Out of darkness and danger
You can't hide your secrets from Lathan Montgomery-he can read your darkest memories. And while his special abilities are invaluable in the FBI's hunt for a serial killer, he has no way to avoid the pain that brings him. Until he is drawn to courageous, down-on-her-luck Evanee Brown and finds himself able to offer her something he's never offered another human being: himself.
Dawns a unique and powerful love
Nightmares are nothing new to Evanee Brown. But once she meets Lathan, they plummet into the realm of the macabre. Murder victims are reaching from beyond the grave to give Evanee evidence that could help Lathan bring a terrifying killer to justice. Together, they could forge an indomitable partnership to thwart violence, abuse, and death-if they survive the forces that seek to tear them apart.

Review:
Lathan is a man who has always been sensitive to others – more than he wants. His olfactory glands are stronger than normal and he can smell the emotional memories of those around him. In a crowd that can be overwhelming and it creates difficulties on individual interactions too. Although his ‘gift’ is frowned on by many, and even makes his parents uncomfortable, the skill has come in handy as he consults with the FBI.

One night as Lathan is riding his motorcycle home he comes upon a car and truck by the side of the road. He smells the fear and anguish of the young woman trying to escape an attacker and steps in to face off with the attacker.

Evanee is trying to make enough money to get out of town and away from her abusive stepbrother, Junior. She shouldn’t go off with a stranger but she must get away from Junior. Evanee is accustomed to having nightmares but having ones that put her in touch with murder victims is new – and frightening. During each nightmare episode, the victim reaches out to her and a dark presence makes her take a token.

Lathan calls in the FBI and they begin to tie together the clues and the bodies to a serial killer known as the Strategist. Lathan has never had a woman focus on his eyes instead of the tattoo on his face. He is awed to have a woman respond to him as honestly as Evanee does. He can’t stop her nightmares but he is determined to keep Evanee safe from her Junior and the Strategist. And both come after her.

I liked the strength of Lathan and Evanee from the very beginning of the story. They both had harsh childhoods and, even as survivors, they are emotionally vulnerable. The author created a relationship with depth and steamy chemistry. There is language and graphic brutality which is why I say this is “gritty”. But Ms. Roads creates wonderfully believable characters and a finely crafted plot, with twists, that carry the story beyond any “grittiness” for me. I may well go back and pick up book 1. I highly recommend this to readers who enjoy strong romantic suspense with a supernatural twist.


I received this from the publisher through NetGalley. It qualifies for my 2017 NetGalley Challenge, Mount TBR and “H” in Alphabet Soup Challenge.
Posted by Martha Eskuchen at 8:39 PM