Audible Book Review: You Will Not Have My Hate by Antoine Leiris

This is very well written and narrated, and poignant in it's message.
You Will Not Have My Hate
Written by: Antoine Leiris
Narrated by: Gildart Jackson 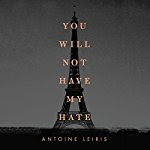 Publisher's Summary
Number one international best seller
"On Friday night you stole the life of an exceptional person, the love of my life, the mother of my son, but you will not have my hate."
On November 13, 2015, Antoine Leiris' wife, Hélène Muyal-Leiris, was killed by terrorists while attending a rock concert at the Bataclan Theater in Paris, in the deadliest attack on France since World War II. Three days later Leiris wrote an open letter addressed directly to his wife's killers, which he posted on Facebook. He refused to be cowed or to let his 17-month-old son's life be defined by Hélène's murder. He refused to let the killers have their way: "For as long as he lives, this little boy will insult you with his happiness and freedom." Instantly that short Facebook post caught fire and was reported on by newspapers and television stations all over the world. In his determination to honor the memory of his wife, he became an international hero to everyone searching desperately for a way to deal with the horror of the Paris attacks and the grim shadow cast today by the threat of terrorism.
Now Leiris tells the full story of his grief and struggle. You Will Not Have My Hate is a remarkable, heartbreaking, and indeed beautiful memoir of how he and his baby son, Melvil, endured in the days and weeks after Hélène's murder. With absolute emotional courage and openness, he somehow finds a way to answer that impossible question: How can I go on? He visits Hélène's body at the morgue, has to tell Melvil that Mommy will not be coming home, and buries the woman he had planned to spend the rest of his life with.
Leiris' grief is terrible, but his love for his family is indomitable. This is the rare and unforgettable testimony of a survivor and a universal message of hope and resilience. Leiris confronts an incomprehensible pain with a humbling generosity and grandeur of spirit. He is a guiding star for us all in these perilous times. His message - hate will be vanquished by love - is eternal.
©2016 Antoine Leiris (P)2016 Penguin Audio


Review:
As the blurb states; “Antoine Leiris' wife, Hélène Muyal-Leiris, was killed by terrorists while attending a rock concert at the Bataclan Theater in Paris” on November 13, 2015. Three days after the event Leiris posted a post to refute the damage of the terrorists by declaring they would not have his hate and would not steal the joy of life from his 17 month old son, Melvil.

This story travels through the immediate reactions of Antoine when he hears of the attack at an event that his wife was attending. He is unable to make contact with his wife and slowly comes to the acknowledgement that she is missing … or worse… killed in the attack. Leiris has to become mother as well as father to their son. He shares the raw emotions of grief and the difficulties dealing with well-meaning sympathies.

I totally appreciated the open sharing and especially the strength exhibited in the sharing. I consider this more a sharing than a story. Although Leiris hoped to write a story for Melvil one day, this debut writing is beautiful, poignant and powerful. It reveals grief, love and the strength and determination to go forward in life. I recommend this to anyone who has suffered a tragedy or wants to understand a life affirming response that can result when faced with such a loss.

Audio Notes: Gildart Jackson does an excellent job narrating this memoir. His soft voice and fitting accent make this a gripping audio experience.


This is from my Audible TBR shelf for "Y" in Alphabet Challenge. This also qualifies for Audiobook and Mount TBR challenges.
Posted by Martha Eskuchen at 9:33 PM