I enjoyed the plot and the narration on this sci fi. 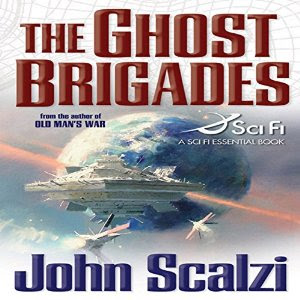 The Ghost Brigades are the Special Forces of the Colonial Defense Forces, elite troops created from the DNA of the dead and turned into the perfect soldiers for the CDF's toughest operations. They're young, they're fast and strong, and they're totally without normal human qualms.
For the universe is a dangerous place for humanity - and it's about to become far more dangerous. Three races that humans have clashed with before have allied to halt our expansion into space. Their linchpin: the turncoat military scientist Charles Boutin, who knows the CDF's biggest military secrets. To prevail, the CDF most find out why Boutin did what he did.
Jared Dirac is the only human who can provide answers - a superhuman hybrid, created from Boutin's DNA, whose brain is uniquely able to access Boutin's electronic memories. But when the memory transplant appears to fail, Jared is given over to the Ghost Brigades.
Jared begins as one of these perfect soldiers, but as memories begin to surface, he begins to intuit the reason's for Boutin's betrayal.
As Jared desperately hunts for his "father", he must also come to grips with his own choices. Time is running out: the alliance is preparing its offensive, and some of them plan worse things than humanity's mere military defeat.
©2006 John Scalzi; (P)2008 Macmillan Audio


Review:
Jared Dirac is like all Colonial Defense Forces (CDF) soldiers – created for the sole purpose of protecting humans. The CDF are advanced special forces created using the DNA of dead humans. They are trained to do the most dangerous missions. Their humanoid bodies are enhanced with special computerized and integrated brain pals that help them process faster and connect each member of the team to the others.

But Jared has something special – he has the cloned brain of Charles Boutin. Boutin was the military scientific genius who perfected the genetic engineering for the integrated brain pal system. He is believed to be dead until Lt. Jane Sagan of the Ghost Brigades discovers that he faked his death and is working with two alien worlds to begin a war against the CDF with plans that would wipe out the human race.

Jared was created using the rogue scientist’s cloned brain in hopes that he could lead the CDF to the traitor, or at least reveal the motive or intentions of Boutin. Jared does not exhibit any knowledge of Boutin when he first awakens. Still Sagan doesn’t trust him and doesn’t want him on her elite team. But a former enemy, now turned friend (sort of) reminds her that sometimes it is best to keep your enemies close.

Jared successfully works with the team for months through several dangerous missions until a trigger sends his mind into a flash back of his daughter. What? His daughter? He never had a daughter. Slowly Jared begins to recall some memories of Boutin. The strongest of those memories include the love for his young daughter and the hate for his commanding officer. Jared needs to determine where the hate comes from and where that anger has led Boutin.

Jared finally comes face to face with Boutin who plans to use Jared as part of his revenge. Some consider the CDF soldiers to be slaves to their creators. They have few opportunities to make real choices. Now Jared is torn between two mind streams – the protective directive of his programming as Jared Darek and the vengeful goals of his DNA based brain. Will he have a choice when matters come to a head?

Initially I was disappointed that this second book did not include John Perry, the protagonist of the first book, Old Man’s War (OMW). I was glad to find Jane Sagan as a returning character. She and the Ghost Brigades connected to the two stories. I came to really like Jared and the author manages to give him strong emotions that are not common to all CDF soldiers. I was rooting for him to realize his uniqueness rather than get swallowed by Boutin’s personality. I enjoyed the twist at the resolution of the threat and look forward to more adventures in the world of OMW. I recommend this series to those who like human characters in their sci fi action stories. Although this could be read as a standalone I liked knowing the background from the OMW.

Audio Notes: William Dufris is a wonderful narrator. He makes the characters come alive, each with their own voice and personality. I really enjoy this series on audio and plan to listen to more.


This title is from my TBR shelf. It qualifies for my 2017 Audio Book Challenge, Mount TBR and "G" on Alphabet Soup Challenge.
Posted by Martha Eskuchen at 9:07 PM