This is a fun time travel sci fi full of creatures and daring adventures.
The Invisible City (The Stolen Future Trilogy Book 1)
by Brian K. Lowe 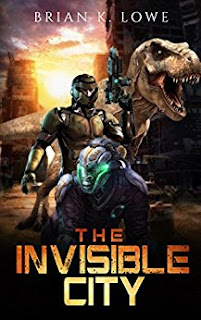 
Tracking German soldiers through the muddy trenches of France, Captain Charles Clee stumbles onto something amazing--a secret archeological expedition from the far future. Discovered and trapped, he flees through their time machine and finds himself stranded nearly one million years in the future. Clee falls in love with a beautiful woman whose family has befriended him, but when she is taken from him by one of Earth's alien overlords, he finds himself the enemy of the one of most powerful men in the world. In his quest to rescue her, he is startled to learn that a working time machine may still exist somewhere. With that machine, he could return to his own time and save his men from certain annihilation, but to do so would mean abandoning his quest. Torn between love and his duty to the men who served under him a million years past, pursued by the merciless assassins of the Time Police, Clee faces war, slavery, and fantastic beasts in a race against time itself--knowing that whatever the outcome, he must lose.
Brian K. Lowe is a member of the Science Fiction and Fantasy Writers of America.


Review:
Captain Charles Clee is an American who choose to face war in France. One morning he was preceding his men into a dangerous situation tracking German soldiers in the rainy, muddy trenches. He follows a man into a cave and inadvertently stumbles into another world… or at least another time! He learns that he has stepped through a time machine and discovers himself far in the future. Clee finds a people whom he initially can’t understand. But he is befriended by a family and falls in love with a young woman. The family helps him create a cover so he can search for the time machine while trying to avoid ‘time cops’.

Clee has to maneuver among a tyrannical alien race, the Nuum, and his troubles increase when his new love is taken by one of the powerful Nuum overlords. Although Clee wants to find a way to return to his own time, he is intent on saving his kidnapped love. His friends provide him with a powerful tool in the form of a holographic library he can carry with him – as long as he isn’t caught with it since possession is illegal. Before he can set off on his adventure he gets caught up in a rebellion and gets shanghaied.

Clee has to escape one perilous situation after another. Along the way he picks up a speaking gorilla, Timash, as a friend and companion. After escaping from a T-Rex they make another friend, Maire, who appears to be a fierce female warrior but turns out to be something else as well.

I must admit that at one point the travels (airships and hovercrafts) and dangers (giant spiders, dinosaurs, and more) made me think of the old tales of Sinbad. Further along I was reminded of spy tricks akin to Mission Impossible escape magic. I appreciated Clee’s friends who help save him when things looked bad. There is plenty of action and several twists that made it a fun adventure to the end.

The story is well written in first person voice of the hero Clee. He is an affable fellow with a strong, optimistic view and logical, if sometimes impulsive, nature. I also liked the literary references to Jules Verne and Shakespeare which would be works known to Clee. This is the first novel I have read by Mr. Lowe and I would be interested in more adventures for Clee and his friends. I recommend this to readers who enjoy engaging science fiction adventure.


I received this in 2016 through NetGalley. It qualifies for my NetGalley Challenge and Mount TBR.

I was drawn to the cover from the NetGalley version. Apparently the cover has changed as it now appears on Amazon with this cover:
What do you think? Do you prefer one cover more than the other?
Posted by Martha Eskuchen at 11:53 PM