This historical romance is nice and moved along quickly.

It Happened One Autumn: Wallflower Series #2
by Lisa Kleypas
Narrated by: Rosalyn Landor 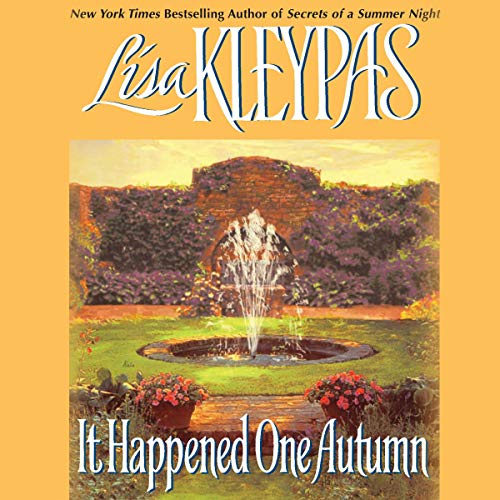 It happened at the Ball….
Where beautiful but bold Lillian Bowman quickly learned that her independent American ways weren’t entirely “the thing.” And the most disapproving of all was insufferable, snobbish, and impossible Marcus, Lord Westcliff, London’s most eligible aristocrat.
It happened in the garden…
When Marcus shockingly – and dangerously – swept her into his arms. Lillian was overcome with a consuming passion for a man she didn’t even like. Time stood still; it was as if no one else existed…thank goodness they weren’t caught very nearly in the act!
It happened one autumn.…
Marcus was a man in charge of his own emotions, a bedrock of stability. But with Lillian, every touch was exquisite torture, every kiss an enticement for more. Yet how could he consider taking a woman so blatantly unsuitable…as his bride.
Published January 8th 2010 by Brilliance Audio.


Review:
Lillian Bowman is a beautiful, head strong American daughter of a man who made his money in soap manufacturing. Lillian and her sister, Daisy, struggled to be accepted by society in New York and will struggle in London too unless they get an aristocratic sponsor. Lillian met Lord Marcus Westcliff at a ball, and they immediately disliked each other. She sees him as snobbish and insufferable. He sees her as crass and overly bold, especially after he comes across her and her friends playing rounders in their undergarments.

Marcus wants to do business with Lillian’s father, so the Bowman family has been included in a two-week house party at his lavish estate. He hopes that he can avoid the daughters, especially headstrong Lillian. He finds the American sisters playing rounders again, this time with their clothes with his stable hands. This time he steps up to try to help Lillian’s bat swing. They soon realize that they need to sneak back into the house and Marcus leads them along a back path. Nearing the door, Daisy escapes into the house but Marcus and Lillian are trapped behind a hedgerow as a group of men pass by. Inexplicably Marcus finds himself mesmerized by this inappropriate young woman and begins kissing her. This begins a reluctant draw between the pair who keep trying to tell themselves and each other that they don’t like the other who would be totally unsuitable.

Marcus’ roguish friend, Lord St. Vincent is willing to play escort to Lillian to keep her out of the way of Marcus. As the days go on it seems that St. Vincent may have plans of his own.

I enjoyed the reluctant relationship between the protagonists. The conflict showcases some class bigotry which is interesting. I was expecting and hoping for a bit of intrigue which finally appears in the last part of the book. I also enjoyed the elements involving Lillian’s skill at distinguishing scents which plays a fun role in the story. My only disappointment with this second book was there were more sexual encounters than were necessary for my taste. Still, it was a quick and mostly enjoyable listen. I have the next book, Devil in Winter, in print but I may have to pick up the audio.

Audio Notes: Rosalyn Landor is always a joy to listen to. She provides wonderful voices and seamless narration that enhances the story for me.