Alien beasties are always of interest to me and I enjoyed this adventure. 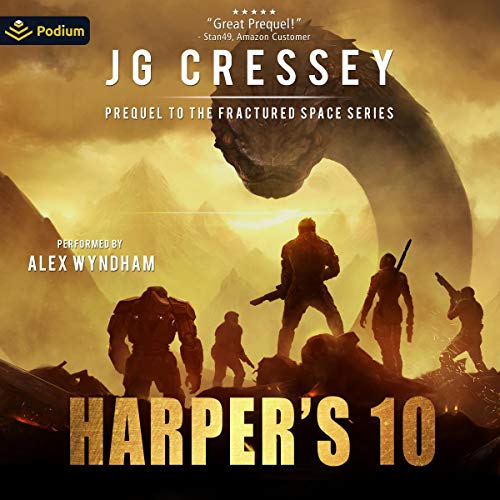 Publisher's Summary
What happens when technology fails and nature bares its teeth?
Lieutenant Callum Harper knows that his team are as tough as they come: nine highly trained men and women and one battle robot who’s 11 feet of pure, cybernetic muscle. But as they drop through the atmosphere of the uncharted planet Capsun 23, Cal can’t shake the feeling that something is off about this mission. Three data drones have previously touched down, but soon after went dark. And now, all communication with a group of civilian researchers has been lost. Intel suspects scavengers are to blame - or at worst, pirates.
But Cal’s instincts are telling him otherwise. All that’s known about Capsun 23 is that the gravity is within acceptable limits, the air is breathable, and water is abundant. Three things to encourage life...but what kind of life? Cal has never been one to back away from a potential fight, but if his instincts are right, a lone team simply won’t cut it. Not by a long shot. ©2015 J.G. Cressey (P)2021 Podium Audio


Review:
Lieutenant Callum Harper is newly promoted and not sure he wants the responsibility of his position. He isn’t particularly happy with his orders either which direct his highly skilled team to retrieve mechanical drones that went dark before checking for survivors of a civilian research team which went silent. Clearly there are problems on this newly discovered planet.

As the team drops through the cloudy atmosphere Cal worries what they will face. They soon discover their technician has troubles dismantling the drone and their shuttle craft begins to experience mechanical failures. After crash landing short of the research center they set out in unknown territory to reach the center and try to get answers. Along the way their camp is attacked by worm creatures of various sizes. Slowly, Cal’s old friend, the battle robot, Max, begins to lose coordination.

The team finds another crashed ship which appears to belong to hostile scavengers. Once they get to the research facility, the team must fight to rescue the survivors and stay alive to return to their ship to disclose the dangers of the planet. Nor everyone will make it back alive.

I enjoyed the characters, and it was difficult to have so many fall in the battles. I appreciated the sense of loyalty to each other among the team members and to helping the researchers. That had hard decisions to make regarding the scavengers. There is plenty of action and the audio moves along at a quick pace. I am interested in seeing where the surviving characters go from here. I recommend this to readers who enjoy Military space action and alien encounters.

Audio Notes: Alex Wyndham does a good job with the narration. He portrays the energy and different voices of the characters and keeps the book moving well. I enjoyed the audio and will want to continue the series on audio.