Book Review: The Duke and the Spoiled Wallflower by Tessa Brookman

It took me some time to get through this, but I am glad I finished it.
The Duke and the Spoiled Wallflower
by Tessa Brookman 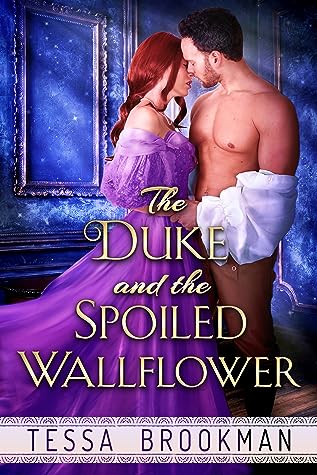 Because she is nothing short of his passion incarnated...
Lady Lydia Bennet is escaping scandal. After moving to London, she makes herself a promise: she will stay away from men and never wed. But when she finds out she has to marry Asher, the mysterious returning Duke, she's forced to confront her dark past.
Asher Graydent, the Duke of Whitehaven, has dedicated his life to avenging his parents’ deaths. Upon returning from the Far East, he finds himself debt-ridden and the only way out is by forming ties with the Bennet family; by marrying their innocent, bluestocking daughter, Lydia.
As the bells of marriage ring closer, Lydia soon accepts she cannot escape her fate. Instead, she uses the Duke to exact revenge on the one responsible for her scarred past.
But as Asher’s lips touch hers, it’s suddenly proven impossible to resist him. But she must...or must she?

Review:
Lady Lydia’s family has moved to London to get here away from a scandal that occurred in her beloved Wales. A bluestocking, Lydia would like to stay away from men, but her parents have arranged for her to marry Asher, a Duke who needs her dowry. Asher was away in Egypt when his parents were murdered, and he is more concerned with finding the murderer than marrying.

Lydia is shaken to learn that Jackson, the man who brought scandal upon her, is now in London and he seems to be a friend of the duke. As part of the bargain to agree to marry Asher, she coerces him into agreeing to exact revenge against Jackson although she will not give Asher the facts.

Asher and Lydia begin to spend time to get to know each other. Lydia discovers that she is drawn to her quiet, respected husband. But when she is out in town with her maid, she is confronted and threatened by Jackson. Lydia steps back from her growing relationship with Asher fearing that her past will bring more scandal.

Asher struggles to balance his obsessive investigation into his parents’ murders, with his reclusive, troubled new wife, and now trying to find out what he can about Jackson. Will he be able to resolve any of these issues and express his growing feelings for Lydia? And how will Lydia move beyond her past?

I like the premise of the secrets in the past creating conflict for the current relationship. I did find it a little frustrating that the secret wasn’t clear to the reader but eventually the facts were dribbled out. It was also frustrating that Lydia learned other critical secrets about her husband’s search that she didn’t share with him. However, my biggest frustration was the writing.

Honestly, at times I thought this had been written in a foreign language and suffered at the hands of translation. Since that doesn’t seem to be the situation, I fault the editing. The early portion of the book is riddled with cliches, awkward phrasing, excessive wordiness, and occasional mixed tenses. I like descriptions but many of the observations were detailed to the point of being annoying. Examples of wording that bothered me:

“Lydia stood frozen in her seat, clenching the arms of the chair tighter as she felt her breath turning hazier and hazier by the second.”
“He expected her to be quiet and shy, so every word that escaped out of her mouth was more unexpected than the last." And three paragraphs later: “He already disliked her, but every word that escaped her lips made him more and more inquisitive.”
“…far different than her own,…”
“I saw you on the paper…”
“They met at a social and he then asked her hand in marriage and they proceeded.”
“She would be away from her family, from the only people that have ever supported her.”

I particularly found the dangling participles distracting. Here are just a couple of early examples that caught my attention:
“The trees hid them from the rest of the women, who were ahead of the path around an adorned wooden table.”
“The blue antique china decorated the table, filled with thin finger sandwiches and seedcakes, some of Lydia’s favorite delicacies.”
All of these examples occurred early in the book so maybe I became overly sensitive which made it harder for me to keep reading. Once I took a break for Fraterfest readathon I found it easier to read through the second half of the book. I didn’t see other reviews that were troubled by these issues so it may have been me not getting off to a good start. I ultimately began to enjoy the primary characters and I think this author has potential if she gets a good editor. Take a look at the other reviews or, better yet, read the sample at Kindle and see what you think.


Source: Received from author team for review. This qualifies for 2021Author review goal.

Posted by Martha Eskuchen at 11:21 PM