This is an exciting and historically informative story.
Alexander X
Battle for Forever, Book 1
By: Edward Savio
Narrated by: Wil Wheaton 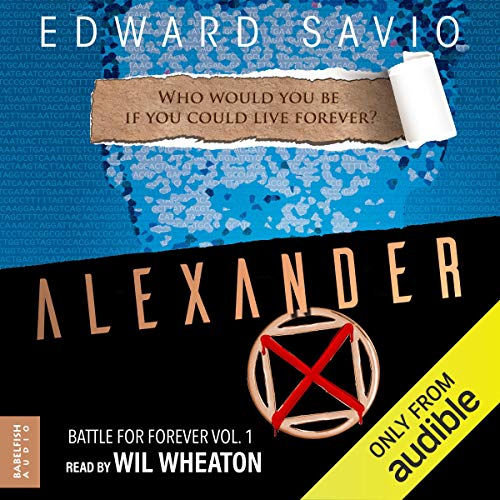 
Publisher's Summary
Alexander Grant is a little too good at a few too many things. Two dozen martial arts. Twice that many languages. Chess, the piano, sports, forging excused absences, you name it. He graduated high school top of his class...seventeen times. Of course, no one knows any of this. Not that he wants to go unnoticed. It’s just safer that way. So for the last several decades, Alexander has been forced to move from town to small town to even smaller town - he just bought his 651st house - in an effort to live a painfully quiet life. But when a mysterious cabal attempts to kidnap him and kill his friends, Alexander must use all his skills and centuries of training to outwit the most dangerous man alive, the mastermind of a plot that would change the world forever.
Clever, intriguing, skillfully woven with humor, Alexander X launches us on an epic journey toward a future few of us will survive, rising from a past we never knew existed.
©2019 Edward Savio (P)2019 Babelfish Audio

Review:
Alexander Grant is not your typical teenager. He inherited a rare gene that slows his aging significantly. He is centuries old and has attended high school seventeen times. He must move from town to town and hide his knowledge and skills to try to live a semi-normal life. Before the days of computers, internet and social media, his task of remaining unnoticed was much easier. In the current years, he and others like him, are facing the danger of discovery of their secret.

Alexander, the teen boy, is having to deal with a school bully who gets in his face and pushes his nerdy friend, Daniel. Of course, there is a pretty girl, Phoebe, in the mix but Alex knows better than to risk getting too involved. Unfortunately, Daniel and Phoebe are nearby when Alexander finds himself under attack by skilled men, apparently with his same rare gene. The men don’t want to kill him but want to capture him, but they have no reason to save any of Alexander’s friends who get in their way.

Alexander stops to grab some supplies so he can get out of town and to a safe house. Alex is confronted by a powerful man and he and his friends barely escape. Now they are on the run and struggling to stay one step ahead of the kidnappers/killers. Finally, Alex and his friends are trapped, and Alex again faces the man who is trying to capture him. Alex learns the man has destructive plans for society and Alex’s father is standing in the way. Will Alex be able to save his friends and find his father to stop the madman?

I liked Alexander’s character with his skills and wisdom based on years of training and living. I found the premise of the book inventive, and I loved the glimpses of historical events described from Alexander’s perspective. I thought this is pretty unique, although the teen element reminded me of The Lorien Series (I Am Number Four), without the aliens and superpowers. I liked the action, which, if not gripping, is entertaining. I will be getting book two to find out how Alexander gets to his father.

Audio Notes: Wil Wheaton is a wonderful narrator and makes Alexander come alive. He conveys the frustrations, self-deprecation, doubts and strengths. Wheaton also provides distinct voices for the characters. The narration helped make this more entertaining for me.