This is a beautifully written, delightful fictional story of the three wise men, and it gives me goosebumps!  [This is probably the closest I will get to "gushing" in a review.]
From Afar
by Roger Thomas 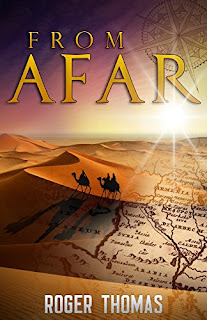 The Magi, or Three Kings, of the Nativity story are among the best loved yet most mysterious figures in all history. The fleeting and sparse account in St. Matthew's Gospel raises as many questions as it answers. It has been so embroidered over the centuries that the original historical context has been almost completely buried. Yet the world of the early first century was as dynamic and intriguing as any legend - and much more perilous.
In his compelling novelization of the journey of the Magi, Roger Thomas draws on Scripture, history, and modern research. This swift-moving tale brings these shadowed figures to vivid life. You meet them as men of their time and culture: learned and noble, yet experienced with a brutal world and even violent when necessary. Come with them as they search for a King they do not understand, and seek for answers to questions lying in the deepest parts of their souls - providing they survive the dangers of the journey.


Review:
This is a beautifully rich imaging of the story of the three Magi who seek the birth of a king that was told in the stars. Melchior is the scholar; the teacher and mentor to the others. Gaspar is a warrior and strategist who hires out for selected battles as he has not yet found a noble general who seeks to serve his people rather than himself. Balthazar is the seeker of truth, trying out any religion he comes across in hopes of finding purity and true devotion. Gaspar and Balthazar meet by chance as they stop to visit their old teacher who seems a bit disheartened.

When Melchior becomes excited by a strange alignment in the stars, they all become interested. He taught them that there are secrets that can be interpreted by watching the heavens. Melchior is convinced that the great star and surrounding planets foretell the birth of a great king. In their discussions, Balthazar shares that there were prophesies given by a Jew in exile that told of many events that Melchior knew were not predicted by any other writings. Melchior is eager to learn more of the dreams and visions of Bel’Tshazzar, also known as Dani’el. After months of study, Melchior announces that based on the teachings he believes that the year has come when a king -more than a king, but the savior of the Jews, the Mesiach - is to be born of the tribe of Judah. The three men agree to follow the path of the star to find the king.

They set out with a good-sized group of retainers and men at arms. They also take along a young slave boy, Baba, who has proven helpful, curious and eager. He is ready for his first journey away from home.

All of the journey is an adventure, but some roads are safe and others bring danger. Along the way, they have encounters where they serve others and are given, or recover, precious gifts. When they reach Jerusalem and discover there is no new born king they falter. Then they get additional information that makes them press on just a bit further to Beit-Lechem.

The author does a wonderful job creating the characters with depths and uniqueness that compliment and strengthen each other. There are other characters too who are nicely drawn and add their own elements, such as Baba and Captain Tegranes. The journey is full of action and carried through to the return to Melchior's estate with interesting details. The story is well-crafted, and the characters and events are totally believable and beautifully presented. I wanted it to be real.

Mr. Thomas uses creative situations where the Magi acquire the gifts they later give to Yusef, Miryam and baby Y'shua. The description as they gaze on "the Divine Child" is breathtaking. The author also deftly weaves in messages of mercy and forgiveness as well as references to New Testament scriptures that may be recognized by those who have read or studied the Bible.

I found this story exhilarating! It gave me goose bumps and still does as I think of it. I had planned to read it earlier in the year but reading it a few months later is fine; almost appropriate just as the Magi came months after the child was born. I plan to buy this for my ladies’ book club and hope they will love reading it as I did. I recommend this to anyone who loves the story of the Three Kings, or Wisemen, as part of the Nativity story… and also to those who may be seekers drawn by the heartstrings of a God who speaks to His people in visions and in heavenly signs.


I am thankful that I received this in December through a Goodreads offering for review. It qualifies for Mount TBR Challenge.

Just a taste of the writing that spoke to me:
Balthazar shares with the others:


“We know that there is order in the spheres of the heavens. The stars and planets step their dance with regularity and harmony.” (Location 272.)
“It is in the heavens that we find the perfect, the unchanging, the incorruptible. It is only on this earth, beneath the sphere of the moon, that we find corruption and decay and imperfection. We men strive to do things, but our doings go awry.” (Location 276.)