This is wonderful entertainment and my only disappointment was that it ended. 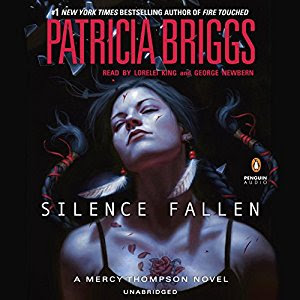 Publisher's Summary
In the New York Times best-selling Mercy Thompson novels, the coyote shapeshifter has found her voice in the werewolf pack. But when Mercy's bond with the pack - and her mate - is broken, she'll learn what it truly means to be alone....
Attacked and abducted in her home territory, Mercy finds herself in the clutches of the most powerful vampire in the world, taken as a weapon to use against alpha werewolf Adam and the ruler of the Tri-Cities vampires. In coyote form Mercy escapes - only to find herself without money, without clothing, and alone in the heart of Europe.
Unable to contact Adam and the rest of the pack, Mercy has allies to find and enemies to fight, and she needs to figure out which is which. Ancient powers stir, and Mercy must be her agile best to avoid causing a war between vampires and werewolves, and between werewolves and werewolves. And in the heart of the ancient city of Prague, old ghosts rise....
©2017 Patricia Briggs (P)2017 Penguin Audio


Review:
Mercy has died at the hands of her step-daughter… as a merciless pirate in a computer game. She heads off to the local corner market to pick up supplies for cookies. Before she can return home she is brutally attacked and kidnapped. One of the most powerful vampires in the world, from Italy, was told that Mercy was the power behind the Tri-Cities coalition of werewolves, fae, gnomes and other supernatural creatures. He doesn’t exactly believe this when the attack to capture her nearly kills her.

Mercy awakes in a foreign place. Although it appears that her ‘host’, Iacopo aka Joseph, has set her up for a failed escape, she manages to surprise the master vampire and his unusual, enslaved drone. Mercy escapes in coyote form, finally arriving in Prague with no clothes, no money and unsure of any safe allies. The pack and mating bond aren’t strong enough to reach half-way across the world. As she walks in the shadows of the streets, Mercy comes upon the Golem of Prague who gets to serve an important role further into to story.

When Adam feels the loss of his mating bond with Mercy, he races to find her and discovers the scene of her attack. He knows she has been kidnapped but has no idea what condition she is in. Mercy’s vampire friend, Stephan, also feels the bond loss and meets Adam at the crime scene. They contact Marsilia, the mistress of the local vampires and are soon ‘invited’ to travel to Italy to be reunited with Mercy. Marsilia and Adam each get to bring two companions plus the pilot and copilot. Marsilia brings Stephan and the head of the goblins, Larry. Adam brings Honey, a strong female from his pack, and his employed, powerful witch, Elizaveta. Adam calls Charles, from Mercy’s childhood pack, to be their pilot, but due to political reasons, her adoptive father, Bran, has separated his ties and is not willing to allow Charles to go. They send a different pilot, another goblin, and a co-pilot who appears to be a submissive wolf.

The story alternates between the POVs of Mercy and Adam as they are separated. I enjoyed the interesting character dynamics particularly from Adam and his team as Adam attempts to remain calm in the negotiations with Joseph. Mercy has to deal with some ghostly elements and unfamiliar packs. She needs all of her usual resourcefulness to wade through her dark misadventures. The chapters are not chronologically sequenced and are introduced by Mercy giving the reader audience a summary of the event setting. Rather than interrupting the flow of the story, this actually adds some priceless Mercy satirical humor.

There are interesting political, philosophical and social musings, including bits of coyote lore, and Golem folklore, woven into this story. Briggs does a masterful job of creating a plot that shares pack and ally dynamics and emotions amid the tense, dangerous situations.

The mixture of suspense, action, humor, romance and emotional dynamics makes this a great series. I stayed up a few hours I should have been sleeping so I could keep listening. Then I was sorry when it ended. I highly recommend this series, starting from the beginning!

Audio Notes: Lorelei King always does a suburb job with the narration of this series. I love her character voices and how she matches the personalities as I believe the author intends. George Newbern was a surprising addition. Unlike many other reviewers, I found George’s performance an okay touch even if I did miss Lorelei’s male voices that we have become accustomed. I love this series in audio.


This is a must listen series for me so I had to get it when it became available. :-) This qualifies for my 2017 Audio Challenge.
Posted by Martha Eskuchen at 11:24 PM