This is not as intriguing as book one, but face-paced and enjoyable. 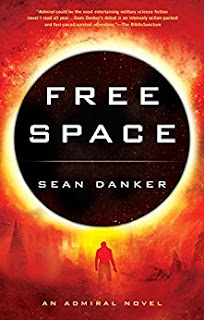 In the follow-up to Admiral, the intergalactic war has ended and hostilities between the Evagardian Empire and the Commonwealth are officially over, but the admiral is far from safe. . . .
I’d impersonated a prince, temporarily stopped a war, escaped a deadly planet, and survived more assassination attempts than I could conveniently count. After all that, there shouldn’t have been anything simpler than a nice weekend with a charming Evagardian girl.
However, some corners of the galaxy aren’t as genteel as the Empire, and Evagardians aren’t universally loved, which is how I ended up kidnapped to be traded as a commodity.
Their timing couldn’t have been worse. I'm not at my best, but these people have no idea whom they're dealing with: a highly trained, genetically engineered soldier in the Imperial Service who happens to be my date.


Review:
The Admiral, an assassin and disguise expert, and Salmagard, a highly trained, genetically engineered soldier, saved each other in their first adventure. Now they are hoping to enjoy some ‘down’ time. Unfortunately, the Admiral is poisoned even before they meet for their date. And that’s just the beginning of their troubles.

They pick up a carrier to do some sightseeing and meet two Imperials, Sei and Diana, when they share the ride. The car is diverted and the four end up kidnapped. Admiral and Sei are separated to be traded while the women are retained for other uses. But their captors do not know what they’ve gotten themselves into as Salmagard and Diana will find a way to escape and go after their dates.

The Admiral and Sei are sold at auction and shipped off site. They awaken on a planet where the people are living in an old earth style community. It appears to be a religious cult led by a man who clearly, to the Admiral’s view, has nefarious plans. The Admiral doesn’t know how he is going to get himself out of this predicament.

This sequel to Admiral kicks off with a good hook and keeps on moving at a fast pace. The cult world is a bit strange and confusing but it provides a backdrop of thought as Salmagard begins to see that her strict training may not have provided all she needs to know of reality and politics. Neither side is full of all the “right” as clearly there are those who abuse power no matter what side they supposedly serve. And in the end, most will serve their own purposes rather than honor the loyalty that may have been expected.

The intrigue and mystery in this was not as intense as in book one. This fills out more of the backstory for the Admiral and Salmagard and I liked the new characters, Sei and Diana. Although this story is almost completely focused on the kidnapping and escape, I did enjoy the fast-paced action and the continued irreverent and pragmatic attitude the Admiral displays even when facing death…again. This made for a fast, fun read. The rather abrupt ending leaves an opening for new intrigue which I hope would be more apparent in the next book.


I received the title through NetGalley. It qualifies for 2017 NetGalley Challenge, Mount TBR and “F” in Alphabet Challenge.

GIVEAWAY:
One PRINT COPY from the publisher - US Only
ENTRY FORM HERE


(Don't forget to fill in the form for entry!)
For 3 Extra Bonus entries
(a) comment on the review, OR
(b) Visit the Author's website and tell me something you learned or like there.

* This contest is open to US for Print Copy.
* This contest will close 5 PM (Central) May 13, 2017. Winner will be announced in the Sunday Post on May 14, 2017.
Winners are asked to respond on the winners form linked in the announcement or by email.
Posted by Martha Eskuchen at 5:30 AM