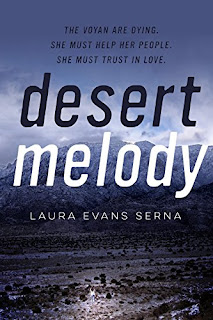 For generations the Voyan have lived peacefully among Humans, blending in despite their special thought-sharing abilities and unique communal culture. But now a mysterious disease is killing Voyan babies.
Teagan is a Voyan wet nurse saving the lives of newborns. As the mother of a half-Human child, she struggles to fit into the Voyan world. When she falls for Josh, a Human man eager to take on the roles of husband and father, she starts to question her deepest beliefs about her people and her own fate.
Soon Teagan faces threats from unknown and unlikely foes. She must decide what she's willing to risk for a chance at love, security, and a future for her child.


Review:
Few Humans are aware that they share their world with two other races: the Voyans and the Ahns. The Voyans share mind thoughts and thrive in communal living arrangements. Their minds are usually busy with the buzz of thoughts which lessens their ability to study and advance in technical fields. The Voyans are struggling as a disease is killing their newborns. Teagan, a Voyan, has given birth to a half-Human child, Brianna. Teagan continues to be a wet nurse to other Voyan newborns who may only survive with healthy Voyan mother milk.

Teagan did not have a good sexual experience when she conceived and she has not been interested in finding a partner, which is unusual in her society. Teagan has a ‘disability’ as she lost the ability to thought share when she became pregnant. This has allowed her to enjoy college studies, especially science labs.

Teagan meets Josh at her favorite coffee hang out. He is attracted to her exotic beauty and is protective when he spots her trying to avoid another man. Teagan keeps bumping into Josh and soon believes that her ancestral grandmother is guiding her to be with him. They slowly become friends and, for the first time, Teagan feels drawn to a man. Her family is very unhappy with this as Voyans are supposed to find a partner among their own kind.

Josh seems to sincerely care about Teagan. He worries that she is involved in a cult group and wants to get her away from that community. Teagan’s immediate family have determined they need to move to a larger, safer Voyan community. The family is inclined to leave Brianna to be raised by her Human family. Teagan is torn as she wants to be with her family but does not want to be separated from Brianna (even though Brianna spends a lot of time with others while Teagan goes to classes and spends time with Josh). Teagan is also torn because she wants to be with Josh.

This conflict increases as the time for the move grows closer. A strong Voyan man appears claiming Teagan is to be his partner. Now she must make a choice – remain with the Voyans, sacrificing her own desires to the needs of the community, or leave her Voyan family to stay with Josh. Suddenly a terrible secret regarding Teagan’s disability is discovered and Teagan is given a warning exposing a secret about Josh. Teagan is reeling from these new facts, when her life takes a drastic turn.

I did find the cult society issues interesting but felt that the science fiction element was merely a peripheral basis for the conflicted romance. There is a lot of detail spent on the wet nurse aspects that effected Teagan’s day to day routines as well as the times of emergency when she had to help newborns.

The story is written in first person from Teagan’s view and there is a fair amount of telling rather than showing. Near the final third of the book there are twists and action which pick up the pace and make the story more engaging. I felt there were several loose ends. I would recommend this more for romance readers than hard sci fi readers.


I received this title through Pump Up Your Book Tours.


Desert Melody is
available for purchase at Amazon
and Barnes & Noble.


I lay in bed, enjoying the morning quiet as I watched my sleeping daughter. Her jet-black hair fanned out across our pillow. Thin white drapes over the window swelled gently as the cool morning air washed over us.
I traced the scars up and down my arms and chest, my hand stopping as usual on the jagged scar across my lower back. Would I ever forget? Did I want to? Thankfully, my Brianna stirred just then, bringing me back to the present. She opened her chocolate-brown eyes and melted my heart with her smile. I sent her off into the kitchen with my aunt Eva so that I could begin my morning ritual. I pulled out my electric breast pump and set it on the dresser.
My milk has Factor K, a protein known to significantly improve survivability for weak Voyan newborns. Only about 10 percent of Voyan women produce Factor K. Even without this protein, though, Voyan milk is invaluable because many postpartum Voyan have found they can no longer produce milk. Despite the efforts of a handful of dedicated Human biochemists, no suitable formula has been developed for Voyan babies. Donors save babies from starvation.
The buzz in my head grew stronger. Unintelligible whispers sneaked in to taunt me, to remind me of my damaged state. I could no longer pick up the thoughts of my family, and they couldn’t pick up mine.
I stepped into the shower, letting the thrum of water on my head chase the mumblings away. As I got dressed, Eva peeked her head in. In the light of the morning sun, the delicate scars across her chest looked like fine lace.
“Teagan, I made cinnamon rolls. Brianna’s favorite.” Her voice was slow and sweet.
“Everyone’s favorite,” I said, winking at Eva. She turned to go but remembered something.
“Going out?”
Eva couldn’t understand my desire to get away from my Voyan family. With the Voyan, I was deaf and mute. I was disabled. Out in the city, I could pretend to be Human.
“I was, unless you need me here.”
“Just a few moments?” she asked nervously. I knew exactly what she meant. Eva wanted me to spend time with our ancestors. Picking up Brianna, I headed to the tiny golden room behind the kitchen.
Brianna was mesmerized by the candles that lit up the small ancestor room. A few silver and gold urns sat together in a corner. I could tell that at one time the urns had engraved designs, but now they were worn from years of being touched and rubbed. They held the ashes of my ancestors as well as those of many other Voyan my family happened to meet.
I closed my eyes, listening for something I knew I could no longer hear. The air was thick, and not just from smoke. I could almost feel the voices of the dead around me, but not quite. And the more I tried to feel them, the harder it was. 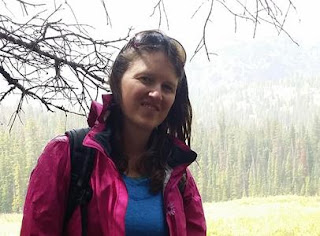 Laura Evans Serna grew up in Albuquerque wandering the Sandia mountains and enjoying magnificent sunsets each night. She was spoiled by the mountain and desert wilderness and the freedom it offered. Now that she’s lived in Oxford, Washington, DC, and Tokyo, she knows how rare and precious that kind of experience is.
As a teenager Laura would lie on her concrete driveway with her siblings and friends, watching Hale Bopp slowly cross the sky. She discussed science and theology with no reservation. What are the laws of physics, and where did they
come from? What do they mean? Where do humans fit into all of this? What binds society together? Laura believes that these are the questions that make us human. They don’t belong to the scientists, philosophers, or theologians. Everyone has a right to make them their own.
Laura started her undergraduate degree in Chemistry at the University of New Mexico. At the time, she was tired of Albuquerque. Until she left she didn’t appreciate the unique mix of cultures or the abundance of intellectual activity of her home town. She married a man in the Air Force and followed him to Colorado, where she spent her time teaching English with Catholic Charities and finishing up a degree in math at the University of Colorado at Boulder. Next Laura moved to the UK where she had the opportunity to study at the University of Oxford. She earned an MSc in Mathematical Modelling while pregnant and experiencing motherhood for the first time. (It was a struggle, to be sure!) Laura found Oxford to be a fantastic, walkable city perfect for pushing a newborn around in a pram. Although they only spent three years in Oxford, she will always feel as if it is a home of sorts for them.
Laura spent periods of time teaching math and doing technical editing, but motherhood suits her more than any other hat she’s worn. Her three daughters are a constant joy. She has come to the conclusion that the world over needs more, not less, of the maternal touch, and she wants to write stories featuring strong, intelligent mothers.