This is a fast-paced, engaging thriller with an interesting female protagonist.
Fake
by Twist Phelan 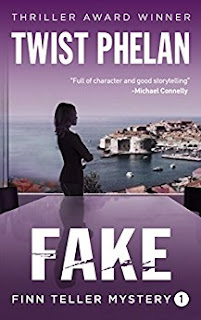 Finn Teller Corporate Spy Mystery #1
Have you ever thought about buying a counterfeit product? Maybe a watch or a handbag for fun? After you read FAKE, the first book in Twist Phelan's series featuring Finn Teller, corporate spy, you'll think again.
From Thriller Award-winning author Twist Phelan comes "a new and capable heroine you'll want to see again" (Jan Burke, Edgar® Award-winning and New York Times-bestselling author). FAKE, the first book in Phelan's new series featuring corporate spy Finn Teller, shines a light on the netherworld of counterfeit goods.
An assignment with a Milan fashion house leads Finn to an undercover investigation of a train wreck in Croatia—scene of her most tragic professional mistake and home to terrorists still out for revenge. The hunter becomes the hunted and the stakes skyrocket as Finn must win a race against the clock to stop the spread of a deadly African pandemic and escape with her life. FAKE is a page-turning mystery that will keep you guessing up to the end.
"Full of character and good storytelling!" –Michael Connelly, Edgar® Award-winning and New York Times-bestselling author


Review:
Finn, a corporate spy, is a tough cookie with some painful guilt baggage. She solves a case in a Milan fashion house which gets her assigned to investigate a train wreck in Croatia. She doesn’t want to return to Croatia which is the place of a mistake she feels she made a few years earlier. But her skills are needed, the client wants her specifically and the boss says “go”.

The train wreck is only part of the investigation as the real problem is that it was carrying a special antibiotic for an African plague. The pills on the train were discovered to be fake when found at the train wreck. Finn is interviewing and investigating both angles of the case but soon is dodging bullets. The attacks on her might be tied to her current investigation or might just as likely be tied to the case she feels she bungled. Either way, she needs to move quickly to save herself and try to help the victims of the plague. Can Finn expose the villains before they or the terrorists take her out?

This has a realistic plot and a fast action ride. I liked how the details were uncovered and the spurts of danger and race to escape made for page turning attention. Finn is a strong character with her own flaws and vulnerabilities. The author interspersed chapters describing the prior event that impacted Finn so hard and left her with enemies in the area. I appreciated that the book moved at a quick pace without compromising on the suspense.

This is the first story I have read by Ms. Phelan but I hope to read more. I may have to try the other series since it involves a female business lawyer. I do recommend this to readers who enjoy a good, fast-paced thriller.


I received this through NetGalley. It qualifies for 2017 NetGalley Challenge and Mount TBR.
Posted by Martha Eskuchen at 8:23 PM