This is a sweet, easy Amish romance.
Plain Proposal (Daughters of the Promise Book 5)
by Beth Wiseman 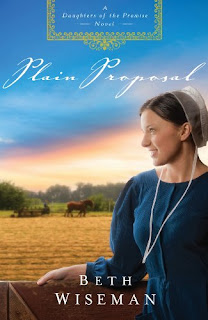 Miriam secretly vows to follow Saul no matter what the future holds. She never thought that future might take them away from their Amish community.
Miriam Raber could have her pick of any of the eligible bachelors in Lancaster County. But she only has eyes for one . . . Saul Fisher. He captured her heart years ago, and she's never looked back. Even when rumors circulate that Saul may leave their Amish community to pursue a once-in-a-lifetime apprenticeship, Miriam makes a bold assertion: she will stand by him, whether he stays or goes.
Saul Fisher has experienced an inordinate amount of loss in his short life. Raising his two brothers and caring for a grieving father who privately seeks solace in the comfort of his homemade wine, Saul has kept his father's drinking from the community. But if he leaves Lancaster, the burden of secrecy will be left to his young brothers. How does he balance this with the dream that burns bright within him?
As Miriam and Saul consider leaving their lives behind, God starts revealing things to Miriam that make her think twice about what it means to be a Daughter of the Promise, and what it means to make a home.
Experience this love story with a surprising resolution by one of the most popular voices in Amish fiction.


Review:
Miriam Raber, at eighteen, is a lovely young woman who hasn’t dated in her Amish community as she is waiting for the right boy. She has believed for years that Saul Fisher is the one for her. This troubles her mother as it is well known that Saul has had a couple of rumbles and now there are rumors that he has plans to leave the community. Why can’t Miriam be interested in Jesse who is interested in her? Jesse is handsome, kind, hardworking and an excellent choice for a partner.

Miriam is looking forward to her first outing with Saul when she learns that her cousin, Shelby, has arrived from the city. Shelby is disgruntled and wary after suffering through her parents’ divorce and getting herself into a bit of trouble which has resulted in her being ‘sent away’ to her Amish cousins. The Amish farm is a culture shock for Shelby and Miriam tries her best to make her feel welcome.

Saul cares for Miriam and wants the chance to spend time with her even though he knows he shouldn’t. He has dreams that will take him to the city if only things remain smooth at his home so he can comfortably leave his younger brothers with their father. But their father is still having struggles after the death of Saul’s mother and sister. Saul is torn between protecting his family, wanting to be with Miriam and pursuing his dream.

Miriam believes that she is willing to be with Saul no matter where he goes but she doesn’t understand his moods as he seems to be pushing her away. She doesn’t yet know the extent of his dreams or his home problems. Will she still be supportive when she learns the full truth?

Initially Miriam’s mother is judgmental of Saul and later misjudges Shelby for influencing Miriam. Later her father becomes controlling as he fears Miriam may choose to leave the community.

Miriam’s parents are walking a fine line between trying to hold on to their beloved daughter and allowing her freedom to make her own decisions. Saul is hiding secrets at home rather than seeking help from others in their community. Shelby is finding her way to rebuilding her relationship with God as she discovers benefits and peace in the simple lifestyle of the Amish community.

This is a sweet story with likeable characters. It reads quickly and easily and the conflicts create a good plot. I really like the premise of what it means to be “a Daughter of the Promise”. There are several faith issues reflected and there are good discussion questions at the end. There are also some yummy recipes. (I’m eager for my hubby to make the Overnight Blueberry French Toast.) I recommend this to readers who enjoy Amish romances.


This was our Ladies Book Club read for April. It qualifies for Mount TBR and "P" in Alphabet Soup Challenge.


(Don't forget to fill in the form for entry!)

* This contest is open to US for Print Copy.
* This contest will close 5 PM (Central) May 27, 2017. Winner will be announced in the Sunday Post on 2/26/17.
Winners are asked to respond on the winners form linked in the announcement or by email.
Posted by Martha Eskuchen at 10:30 AM