This is a fun read - a squad fighting magic by confiscating the books that let the monsters out.
Bookburners
by Max Gladstone, Mur Lafferty, Brian Francis Slattery, Margaret Dunlap 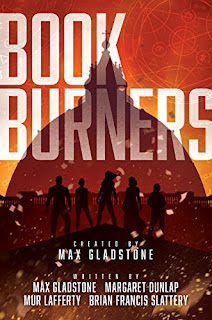 Magic is real, and hungry. It’s trapped in ancient texts and artifacts, and only a few who discover it survive to fight back. Detective Sal Brooks is a survivor. She joins a Vatican-backed black-ops anti-magic squad—Team Three of the Societas Librorum Occultorum—and together they stand between humanity and the magical apocalypse. Some call them the Bookburners. They don’t like the label.
Supernatural meets The Da Vinci Code in a fast-paced, kickass character driven novel chock-full of magic, mystery, and mayhem, written collaboratively by a team of some of the best writers working in fantasy.
Originally presented serially in 16 episodes, this omnibus collects all installments of Bookburners Season One into one edition.


Review:
This book tells the tales of a squad known as the Bookburners. Thank goodness they don’t really burn books – well at least Team 3 doesn’t. They capture the magical books that allow monsters, usually evil and harmful, out to hurt the world.

The reader first meets Detective Sal Brooks when her brother shows up at her home with a strange book. The next thing Sal knows people are knocking on her door looking for her brother. The strangers burst into her apartment and she experiences a warp in time as her brother vanishes. Sal joins ‘the team’ to find her brother and soon learns that things are much stranger than she knew.

The team is based out of the Vatican and consists of a Menchu, a priest, Asanti, an archivist, Liam, a computer whiz, Grace, a fierce monster fighter (with secrets) and now Sal, an observant and determined detective. Actually, they all have secrets from their pasts that resulted in them being selected or recruited to Team 3. There are other teams who may be called in if Team 3 can’t contain the situation or if there needs to be clean up after Team 3 captures the book and shuts down the demon it contains.

The book consists of 16 Episodes which were apparently originally released in serial form. Combining them made this a bit long (at least for me) but I liked reading all of the adventures together. The episodes tell different assignment adventures running chronologically. There are four authors but the episodes flow well together. Although several of the monsters are very strange, there were only two episodes that I found really bizarre. One of those was a trip into a very strange ‘hellish’ realm.

I really liked the characters, whose traits, quirks and vulnerabilities are revealed though the assignments with each getting a time when their strengths are ‘showcased’. The interactions of the team add engagement beyond the monster fighting action. I found myself rooting for them to work things out together and to overcome the enemies within their own organization. This is a bit zany but a lot of fun. I recommend it to readers who like monster hunting adventures served up with humor.


I received this title through NetGalley. It qualifies for 2017 NetGalley Challenge, 2017 Mount TBR and “B” in Alphabet Challenge.
Posted by Martha Eskuchen at 11:00 PM