This sci fi has a different plot, intrigue and romance.
Horizon
by Tabitha Lord 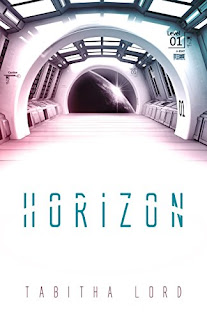 Caeli Crys isn’t living—she’s surviving. On the run after the genocide of her empathic people, she witnesses a spaceship crash near her hidden camp. When she feels the injured pilot suffering from miles away, she can’t help but risk discovery to save his life.
Commander Derek Markham awakens stranded on an uncharted planet. His co-pilot is dead, his ship is in ruins, and he’s only alive because a beautiful young woman is healing him with her mind.
As Derek recovers, Caeli shares the horror of her past and her fear for the future. When Derek’s command ship, Horizon, sends rescue, Derek convinces Caeli to leave with him. But his world is as treacherous as hers—full of spies, interplanetary terrorist plots, and political intrigue. Soon the Horizon team is racing to defend an outlying planet from a deadly enemy, and Caeli’s unique skills may just give them the edge they need to save it.


Review:
Caeli is a healer and a sensitive empath. She is one of the few remaining of her gifted people after a split off race on her planet attacked and destroyed her community. They took the children to be brainwashed and a handful of survivors to use for their skills and as a cover-up to the truth. Caeli had begun to settle in working with the Doctor and hospital staff at the new community. She was asked to join an underground rebellion group who are seeking a way to overthrow the vicious leader who destroyed her own society and frightens many of this community.

Caeli is distressed when the brutal dictator, Marcus, pulls her in to read the mind of a suspected rebel … or watch as he is tortured, then killed. She cannot reveal her friends so she must go on the run so her skills cannot be used again. While hiding out in her secluded cave, she sees a spaceship crash and senses the injuries and distress of the occupants. She is able to rescue Derek, Commander of the attacked ship. She heals him and they develop a bond as they dodge her enemy and wait for his force to rescue him. Although her people never thought to leave their planet., Caeli agrees it will be safest to go with Derek for the time being. That is until Derek’s new mission seeks Caeli’s special skills in order to act quickly to prevent a terrorist attack.

Caeli has to adjust her mind to using her skills for other than healing and without permission of the subject. But she recognizes the cost of failing to give aid when she can. Now she is part of Derek’s special undercover team having to cope with monstrous, evil men while trying to save lives.

From the very beginning I like Caeli’s helper and ‘survivor’ personality. She goes through terrible trauma but, with the help of others, is able to rise and use her skills for good wherever she finds herself. She does not let revenge take over but wisely bides her time trying to find another solution.

The author fills in Caeli’s backstory with alternating chapters as she shares her history with Derek. Derek is a likeable character and the interaction between the two is handled nicely. There is clearly a connection that moves them closer but details are ‘kept behind doors’. The story moves at a good pace and kept me interested. My only disappointment is the few foul words that the author scattered in the story as though she felt they were needed. In my opinion, they were not needed and were disruptive – especially since the random entries were from a female character. Other than that, I enjoyed the book. There are a few questions left open such as Caeli's reaction to reading the mind of the enemy and what is happening back on her planet. I look forward to the next book, Infinity (review to post June 20).


I received this through NetGalley for aniRead Book Tours review. It qualifies for my 2017 NetGalley Challenge.

Tabitha currently lives in Rhode Island. She is married, has four great kids, two spoiled cats, and lovable lab mix. Her degree is in Classics from College of the Holy Cross and she taught Latin for years at an independent Waldorf school, where she now serves on the Board of Trustees.
Tabitha’s debut novel, Horizon, won the Writer’s Digest Grand Prize for Self-Published Fiction in 2016, and was named finalist in the Next Generation Indie Book Awards and National Indie Excellence Awards. Infinity, the second book in the Horizon series, will be released in June 2017. Her short story “Homecoming” appears in the anthology Sirens, edited by Rhonda Parrish and published by World Weaver Press, and was recently nominated for a Pushcart Prize. She is also a senior editor for www.BookClubBabble.com.

Visit her blog at www.tabithalordauthor.com where she discusses favorite topics including parenting, teaching, and her writing journey.

Book Description:
In the second installment of the award-winning Horizon series, Dr. Caeli Crys returns to her war-torn world to fight for those she left behind.

Almagest, Caeli’s home, stands on the brink of revolution. Long hidden from the rest of the galaxy, the once-peaceful planet suffers under a regime that grows more violent and oppressive by the day. Marcus, Almagest’s dictator, is building an arsenal of alien weaponry by selling empathic children into slavery. A resistance has risen, but they are outmanned, outgunned, and in hiding.

Joined by Commander Derek Markham and his elite squadron of operatives, Caeli embarks on a dangerous mission to find the Resistance, rescue her captive people, and save her civilization from destruction.