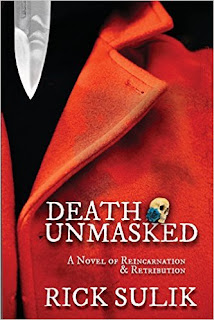 A reincarnated evil is stalking the women of Houston. With each murder, the madman quotes an excerpt from the Oscar Wilde poem, “The Ballad of Reading Gaol.” A huge smokestack belching smoke, a ragged flea market double-breasted wool coat, and an old antique picture frame, bring the distant past back to haunt Houston Homicide Detective, Sean Jamison. With those catalysts, Jamison knows who he was in a past life and that he lost the only woman he could ever love. Searching for his reincarnated mate becomes Jamison’s raison d’être as he and fellow detectives scour Houston for a brutal serial killer. The memory of timeless love drives Jamison’s dogged search for a serial killer, determined to finish what he started decades earlier.
Each clue brings Jamison closer to unmasking his old nemesis. Tenacious police work, lessons learned in the past, and intuition may be the only weapons he has in preventing history from repeating itself.


Review:
This story sets off in a distant time and place with a love and marriage “made in Shangri-La”. Emil is a common workman who plays the guitar and sings love songs to his beautiful wife, Laura. They are happy, though poor, and are content to dream of their own family living peacefully. They never expected their country or small town to be invaded by brutal men. When Emil senses danger they try to run, but do not escape. They are gathered with others, marched into town and loaded into crowded trains. Before they reach their destiny, Laura is taken by one of the soldiers, brutally used and discarded in the snow. Emil is devastated but when he lunges towards the man a gun stock is swung into his face, breaking his nose. He could not save his young wife in this life but vows he will find her. And, as a last act before he is sent to his own death, he stares into the face of the monster who killed Laura and severely injures him.

The author then moves forward to current day to follow Homicide Detective Sean Jamison, a man born with a crooked nose. Sean is a dedicated cop seeking 'to protect and to serve'. His work has left him no time for relationships although he is sure that he will meet the woman who is his destiny – perhaps when he retires, which is in his near future. Before he retires though, he is pulled in for a special investigation of a murderer stalking women. The man leaves a line of poetry from Oscar Wilde at each scene and had been responsible for the kidnapping of a fellow officer’s wife a few years before. The poem, certain scenes and objects jar Sean’s subconscious memory of a past life. Now he is certain he will find his destined love and may also have the chance to capture a monster.

Sean is known by his associates as a loner with strange abilities or senses. As they work together, Sean’s superior, Captain Virginia Schaeffer, begins to fall in love with him in spite of his standoffish behaviors. Suddenly Sean tracks down a woman he thinks is his long-lost love. Can he and the investigative team save her from the mad murderer?

Mr. Sulik weaves poetry into the story, particularly the historic portions. The lines are haunting and the love story he paints is beautiful. I found this engaging from the beginning and it moves along at a steady pace. I was not sure how I would feel about the reincarnation elements but I appreciated the unique twists of the reincarnation and entwined lives. I recommend this to readers who like a good mix of suspense and clean romance.