Every time I listen to one of these I remember how much I like this series! 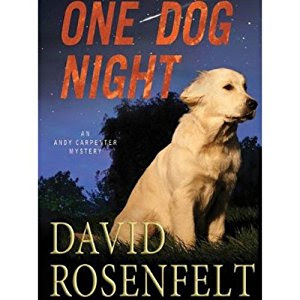 Length: 8 hrs and 10 mins
Series: Andy Carpenter, Book 9
Unabridged Audiobook
Release Date:07-22-11
Publisher: Listen & Live Audio, Inc.
Genre: Mystery, Legal Procedures
My Rating: 4.5 of 5.0
Publisher's Summary
For six years Noah Galloway has lived with a horrible secret and the fear that his rebuilt life could be shattered at any moment. Now his dread has become a certainty, and he has been arrested for the arson murder of 26 people.
David Rosenfelt, a native of Paterson, New Jersey, is a graduate of NYU. He was the former marketing president for Tri-Star Pictures before becoming a writer of novels and screenplays. He currently lives in Southern California with his wife and 35 dogs.
Grover Gardner, a Washington, DC.-based actor, director and audiobook narrator, has been a member of the Woolly Mammoth Theatre Company in Washington, as well as Resident Director at Everyman Theatre in Baltimore.
©2011 David Rosenfelt (P)2011 Listen & Live Audio, Inc.
Review:
Andy Carpenter is a wealthy lawyer who doesn’t like to work. Although an excellent and winning defense lawyer, he takes cases only when circumstances compel him to. Often those compelling circumstances include a dog. Andy has a rescued golden retriever, Tara, and is co-owner of a dog rescue shelter which is primaryly operated by a friend and former client.

Andy is currently in his usual non-working status when a young woman approaches him. She has come to ask him to defend her husband, Noah, who has been accused of setting a fire six years earlier in which 26 people were killed. Andy questions why he should talk to her husband, much less represent him. The response is surprising and gets Andy to the first interview. What he learns after that keeps him on the case in spite of seemingly overwhelming circumstantial evidence and the fact that Noah initially believes himself guilty.

Bit by bit Andy and his team begin to uncover clues that support Noah’s innocence. The team includes a former police officer turned private investigator, Lori, who is also Andy’s love; a giant-sized muscle man, Marcus; a brilliant but negatively critical lawyer, Hike; and a computer/financial wizard, Sam. This time Sam engages the help of his senior’s computer class to help track the phone connections and the money. And of course, Tara who serves as a walking sounding board when not ferreting out actual clues.

Andy doesn’t have to prove who set the fire to win the case. But he does have to pull together the pieces of an alternate theory so he can create reasonable doubt in the mind of the jurors. It is a bonus if (like Perry Mason stories of old) he can expose the true culprit. Andy knows he is on the right track as possible leads and witnesses turn up dead before he can secure their stories, much less their testimony.

As the tidbits of facts are woven together, Andy’s team uncover a blackmailing scheme and connections to a terrorist cell that must be stopped. There is a last-minute rush to stop the terrorists even if security reasons might keep the FBI from using the details to convince the Judge to stop Noah's trial.

I love the wonderfully crafted plot and the self deprecating humor in this legal mystery series. It is great to read/listen as Andy skillfully cross examines the witnesses trying to create a reasonable doubt. He begins to put together the puzzle pieces of facts that reveal the true motive for the arson. It takes attention to detail to connect the dots in this twisted chain of events that involves elements dating back over six years. I highly recommend this series to readers who love tales of solid mystery and legal procedure.

Audio Notes: Grover Gardner is “the voice” of this series. He successfully presents the voices and personalities for each of the characters. His methodical narration contributes to the wry humor that flows through the story. I love listening to this series!


This is from my Audible TBR shelf. It qualifies for Audio Book Challenge, Mount TBR and “O” in Alphabet Soup Challenge.
Posted by Martha Eskuchen at 5:30 AM