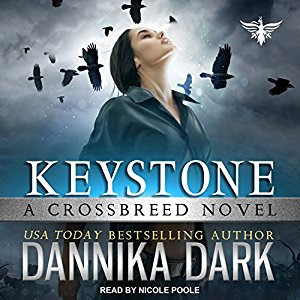 Publisher's Summary
When the road forks, how do you know which path is the right one? Raven Black hunts evildoers for fun, but her vigilante justice isn't the only reason she's hiding from the law. Half vampire, half mage, she's spent years living as a rogue to stay alive. When a Russian shifter offers her a job in his covert organization hunting outlaws, dignity and a respectable career are finally within her grasp. The catch? Her new partner is Christian Poe - a smug, handsome vampire whom she'd rather stake than go on a stakeout with. They're hot on the trail of a human killer who will stop at nothing to get what he wants. One misstep during her probationary period could jeopardize Raven's chance at redemption, and her partner would love nothing more than to see her fail. Dark secrets, unexpected twists, and a blurred line between good and evil will keep you on the edge of your seat. Will Raven find the courage to succeed, or will she give in to her dark nature?
©2017 Dannika Dark (P)2017 Tantor


Review:
Raven is a rouge who doesn’t have a ‘clan’ that fits. She is a very rare mix – half vampire and half mage. She has to keep her nature secret or the mage powers might well choose to destroy her. Since she is unregistered she has no breed standing and it unable to get a legitimate job. As she struggles to survive, sheltering in the streets and on rooftops and scavenging food, she sees evil in the streets and she doesn’t like it. She has been killing the evildoers who feed and hurt innocents. They have become her prey. But her lifestyle is far from safe. Not only is she malnourished, she is in danger from the bigger, stronger hunters. So far she has been lucky but that won’t last forever, especially now that she has caught the eye of a corrupt mage.

Another group has been watching Raven too. A group known as Keystone who are a group of gifted misfits led by a cautious Russian Shifter, Viktor. Viktor gives loners a chance but insists on loyalty and following rules. The Keystone group takes jobs investigating criminal activity and taking down the evildoers on occasion when it is necessary. Raven really needs the training and support she can gain from working with Keystone, not to mention steady food and housing. But her loner habits make it hard for her to toe the line.

Raven is partnered with a haughty, Irish vampire, Christian. Raven hates her vampire nature and views vampires as evil. Christian doesn’t trust an impetuous rogue scavenger who doesn’t know how to back up her teammates. The two rub each other the wrong way, probably because they are fighting the underlying attraction.

Other members of the group have unique skills and personalities and I enjoyed how the author introduced each and revealed their gifts through the action and interplay. I especially liked the blind martial art sensei, Nicco, who is a master with knives.

The plot includes Raven’s predicament and the corrupt mage trying to rebuild his holdings. The action is nicely interspersed with the learning steps that Raven is struggling through. This results in steady pacing and good balance. This is the first book I have read by Ms. Dark but I am sure to read more. I recommend this to those who like a urban fantasy.

Audio Notes: Nicole Poole is a new narrator to me and she does a good job with the narration. She gives each character, male and female, their own personality and fitting emotions. I was glad to listen to this and recommend it in audio for those who enjoy a good listen.


I received this audio from the publisher through Audiobook Jukebox. It qualifies for my 2017 Audio Book Challenge.
Posted by Martha Eskuchen at 7:19 PM