This is an engaging mystery that is fun for young girls... and adults. 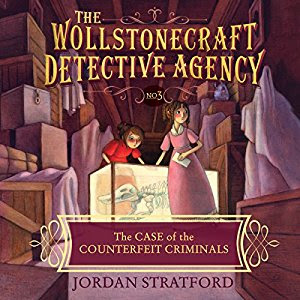 Publisher's Summary
The Wollestonecraft Girls embark on their most important case yet - the famed dinosaur fossil hunter Mary Anning is being blackmailed. Her precious dog has been snatched and the kidnappers are demanding that Miss Anning authenticate some fake dinosaur bones up for auction at the British Museum in order to get him back. Ada and Mary have just three days to track down the fossil fakers, find the dog, and save the integrity of science!
The game is truly afoot in this quirky caper involving blood-sucking leeches, an asthmatic pug, smoke bombs, secret elevators, diabolical disguises, and wicked word-play.
©2017 Jordan Stratford (P)2017 HighBridge, a division of Recorded Books


Review:
Ada and her young friends, including Mary Shelley, have formed the Wollstonecraft Detective Agency solving selected cases. Ada has been sick and has spent much time in bed while the doctor leeches her blood. She realizes that her former governess has held her mail and finally gets a stack. Ada, Mary and friend Jane, start sorting through the letters to decide on their next case. They come across a letter from a famous dinosaur fossil hunter, Mary Adding, whose dog has been kidnapped and decide this is the case.

Ada’s fierce grandmother comes home, grounds Ada to bed and ousts her friends and tutor. Now Ada has to creatively get away from the sick bed, sneak out to meet with her friends and try to help Mary find the kidnappers and rescue the dog.

Ada is a science whiz and loves math and all sorts of puzzles. She discovers notes that have been written as anagrams and believes that her nemesis is behind the group that is blackmailing Ms. Adding asking her to verify a fake fossil exhibit at the British Museum.

It is fun to follow Ada and her friends as they hunt down scoundrels, work on clues and manage some surprising interventions. This is an engaging, fun read/listen even for an adult and would be great for young girls 8-13.

Audio Notes: Nicola Barber does a fine job of narration. She captures the sweet voices and accents of the characters. The pacing is good and makes for a fun listen.


I received this from the publisher through Audiobook Jukebox. This qualifies for my 2017 Audio Book Challenge.
Posted by Martha Eskuchen at 8:45 PM