A fun mystery with twists and turns to keep you guessing. 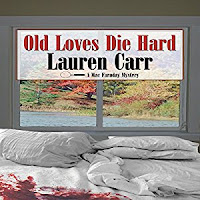 Publisher's Summary
Old loves die hard...and in the worst places.
In Old Loves Die Hard, Lauren Carr continues the rags-to-riches story of Mac Faraday, an underpaid homicide detective who inherits 270 million dollars and an estate on Deep Creek Lake, Maryland, from his birth mother on the day his divorce becomes final.
Mac is settling nicely into his new life at Spencer Manor when his ex-wife Christine shows up-and she wants him back! Before Mac can send her packing, Christine and her estranged lover are murdered in Mac's private penthouse suite at the Spencer Inn, the five-star resort built by his ancestors.
The investigation leads to the discovery of cases files for some of Mac's murder cases in the room of the man responsible for destroying his marriage. Why would his ex-wife's lover come to Spencer to dig into Mac's old cases?
With the help of his new friends on Deep Creek Lake, Mac must use all of his detective skills to clear his name and the Spencer Inn's reputation, before its five-stars - and more bodies - start dropping!
©2016 Terri Lynn Zaleski (P)2016 Terri Lynn Zaleski


Review:
Mac Faraday is a retired homicide detective who is trying to get accustomed to the estate, Inn and wealth that he inherited from his natural mother. The estate comes with his mother’s research and computer assistant, a beautiful young woman, Archie, and an unruly German Shepard, Gnarly. The two (Mac and Archie more than Mac and Gnarly) have a budding relationship which they are just about to explore when Mac’s inebriated ex-wife, Christine, shows up at the door wanting him back.

Mac takes Christine off to the Spenser Inn to sleep out the night. Before the next morning rolls around Christine and her ex-lover, the man she left Mac for, are found murdered. Mac would make a great suspect since his only alibi for the remainder of the night is Gnarly. Mac’s half-brother (and best friend) happens to be the local police chief. David must interrogate Mac but once he rules him out as a suspect, they tackle the investigation together. After all, the dead man had a handful of files form Mac's old cases with him and a list of names that is a mystery.

I enjoyed the hassle and craziness provided by Mac’s ex-sisters-in-law and a law colleague and wife of the estranged lover and a Judge, all of whom show up wanted something from the deceased’s possessions. They add color to the investigation as David and Mac try to locate the mysterious woman who was caught on camera entering the suite but never leaving.

The story moves along well with humor, action and intrigue. The romance is on a slow simmer while Mac copes with his children and the loss of his ex. It is nicely handled. This is the third book I have listened to from this author. I recommend Ms. Carr for easy, fun cozy mysteries.

Audio Notes: James C. Lewis does a decent job with the narration. He does not necessarily try to create a voice for each character but he still conveys the nature of the personalities. I’m sure these mysteries would read well in print/ebook but I really enjoy the ability to listen to them in audio.


I received this title through iRead Book Tours. It qualifies for my Audio Book Challenge.


Welcome to Lauren Carr's Audiobook-a-palooza Blog Tour! To celebrate the release of Lauren Carr's mysteries in audiobook format, we have 14 books from her three series on tour!

To follow the tour, learn about all of the books and to read reviews, please visit Lauren Carr's page on iRead Book Tours.


All of Lauren Carr's books are rated PG-13 because they are murder mysteries and will contains murder scenes. Some of the books contain violence associated with military assignments. There are some books that contain sex scenes which are not explicit. There is little profanity, no f-words.

Lauren Carr is the international best-selling author of the Mac Faraday, Lovers in Crime, and Thorny Rose Mysteries—over twenty titles across three fast-paced mystery series filled with twists and turns!

Book reviewers and readers alike rave about how Lauren Carr’s seamlessly crosses genres to include mystery, suspense, romance, and humor.

Lauren is a popular speaker who has made appearances at schools, youth groups, and on author panels at conventions. She lives with her husband and three dogs (including the real Gnarly’s klutzy nephew Sterling) on a mountain in Harpers Ferry, WV.

Although his specialty is noir fiction, James has done several non-fiction books as well on a range of people and subjects: Butch and Sundance, General Custer, Revolutionary War, psychic development, taxes.

James Lewis has been awarded the AudioFile Earphone Award for narration, "The Last Outlaws". It's about Butch Cassidy and the Sundance Kid.