This is a very good crime thriller. I want to continue the series.
Killer Lawyer (Jake Wolfe Book 3)
by Mark Nolan 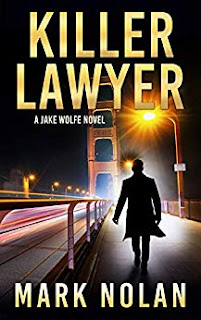 Jake Wolfe is a young lawyer who leads a secret life as a government assassin. Trained by the CIA, Jake now wants a new life of peace and quiet, living on a boat and practicing law. But when his city is shocked by a serial killer and he’s framed for the murder of a friend, Jake must race against time to find the killer before he strikes again.
Drawn into a deadly game of cat and mouse; at every step Jake and his loved ones are being hunted by the clever, twisted madman. As the city is gripped in fear of the seemingly random shootings that could strike anybody, Jake investigates and uncovers ominous clues until a shocking reversal of fortune changes everything.
With the clock ticking and lives at stake, will Jake be able to find and stop the killer in time, or will he become the next victim?
Buckle up for a wild ride as Jake Wolfe and his exceptionally intelligent dog, Cody, return to action in this page-turning thriller in Mark Nolan’s bestselling series that has earned thousands of 5-star ratings on Amazon and Goodreads.


Review:
Jake is a former military man who has been recruited as a secret government assassin. He has passed the bar to become an attorney although he doesn’t exactly have paying clients yet. Mainly because he keeps charging only a $1.00. Jake lives on a friend’s boat with his ‘retired’ military dog, Cody. Jake has been dating local veterinarian, Sarah, but she put a hold on their growing relationship after seeing Jake in defensive mode. She feels his life style is too dangerous… which may be true.

Currently Jake is executing (no pun intended) a mission directed by his ‘handler’. He community is dealing with a serial killer called the “Random Killer”. Jake’s sweet elderly neighbor is killed and clues left implicating Jake. Before the local authorities have fully cleared Jake, he has convinced his handler to get him deputized to the Marshall’s office so he can get on the task force hunting this killer.

Jake and Cody set off to find the killer who leads everyone on a chase from one end of town to the other. Unfortunately, Jake’s actions have put the killer on the hunt for Jake and those he loves. Will Jake be able to get the killer before he injures someone he loves? Will his activities result in Sarah totally ending their relationship?

I really like Jake as a character although it does cause mixed feelings to think that assassins and secret organizations exist around us. Author Nolan gives the reader an intriguing view of the killer too, following his thoughts and activities. I like the combination of danger, action, issues of diplomatic immunity, tidbits of law, and a touch of romance in this series and I will look to read more. I recommend this to fans of the strong, silent hero crime thriller.

Posted by Martha Eskuchen at 4:54 PM