This is a fun Regency romance & I will seek this author again.
The Unwanted Heiress
By: Amy Corwin
Narrated by: Ruth Urquhart 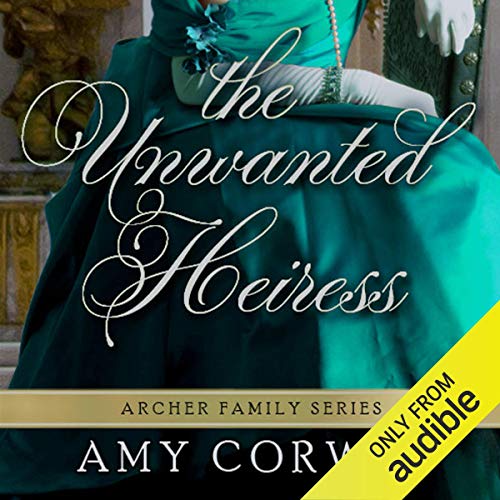 
Publisher's Summary
An American heiress nobody wants; a duke every woman desires; and a murder no one expects.
As a young duke, all Nathaniel wants is to be left alone. So when he meets Charlotte, an outspoken American heiress, he is suspicious of her indifference. Too many women have sought - and failed - to catch him.
However, Charlotte is unimpressed by his title. She has no interest in English dukes. All she wants is to leave dreary England and travel to the sunny sands of Egypt to see the grand pyramids.
Unfortunately, a debutante seeking to entrap Nathaniel gets murdered, and his reputation as a confirmed misogynist makes him a suspect. On impulse, Charlotte comes to his aid, unaware that her actions place her in danger, too.
Neither Charlotte nor the duke know that a highwayman interested in rich heiresses is following Charlotte, and that another debutante lies dead in Nathaniel's carriage. And unfortunately, the evidence soon complicates Nathaniel's efforts to prove his innocence and convince Charlotte that he is worthy of her love.
Some nights just don't go as planned.
©2008 Amy Corwin (P)2016 Audible, Inc.


Review:
Charlotte is an orphaned, outspoken American heiress. She has been passed from one distant family household to another when the fathers or mothers find her ideas unwanted. Charlotte has just been moved again, not realizing that she was lost/won in a card game. Lucky for Charlotte her new guardians, John Archer and Lady Victoria, are thrilled to have her and want her to feel wanted. Charlotte is surprised by this pleasantness, but her real hope is that perhaps they will help her fulfill her dream to travel to Egypt to work with an archeological dig. Meanwhile she is stuck attending the ton events even though she has no interest in finding a suitable husband.

Nathan is a young Duke who is not interested in finding a wife. Predictably, society is full of single women and their mothers who are determined to catch him. Rather unpredictably, these young women are willing to do anything, even if it means compromising situations. When Nathan meets his uncle’s new ward, Charlotte, he doesn’t trust the fiery redhead’s indifference. But before he can learn much about her, other than that she likes to study moths, one of the young ladies who chased him into the gardens during a ball is found dead. No one saw the murder, but another man is quick to direct suspicion at Nathan, noting that Nathan has a reputation as a misogynist since he keeps trying to avoid the ladies.

Uncle John talks Nathan into a rather crazy idea, or two, which don’t go well. The relationship between Nathan and Charlotte grows but gets greatly muddled. Meanwhile, more young ladies are found dead in situations implicating Nathan. Nathan has a limited time to clear his name before he is forced to meet one of the fathers in a duel.

Charlotte believes in Nathan’s innocence but that doesn’t mean she wants to enter into a fake engagement. No one realizes that a wicked fortune hunter is stalking Charlotte until she is kidnapped. Can Nathan find her before she is injured, and can he convince her that he wants her for real?

There are elements not totally believable in this story of reluctant, but growing, romance. The story moves along nicely with a fun plot and engaging characters. I really liked the secondary characters too, including Nathan’s friend from school who steps in to help investigate. I discovered that I have several other ebooks from this series, and I look forward to reading them. I recommend this to fans of clean, lighter Regency Romance.

Audio Notes: Ruth Urquhart’s narration provides an apt accent with voices that are distinct. I wasn’t enthralled with the narration but it worked fine for me. Listening moves faster for me than reading on my kindle so I appreciated having this on audio.


Source: 8/2/2021 Audible Plus Catalog (with a limited time availability). This qualifies for 2021Audiobook goal.
Posted by Martha Eskuchen at 11:50 PM