This is engaging fantasy and I want to continue with the rest of this series.
Infinity Blade: Awakening
By Brandon Sanderson
Narrated By: Samuel Roukin 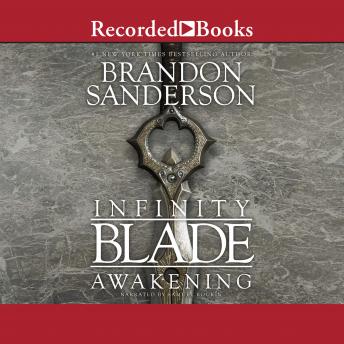 Summary:
Trained from birth in swordplay and combat, a young knight named Siris has journeyed to the Dark Citadel with a single purpose: fight through the army of Titans to face the tyrannical God King in one-on-one combat. This was his father's sacred mission, and his father's before him, going back countless generations in an effort to free their people from enslavement.
But when Siris somehow succeeds where all those from his bloodline previously have failed, he finds himself cast into a much larger world, filled with warriors and thieves, ancient feuds and shifting alliances, Deathless immortals and would-be kings. His quest for freedom will take him on an epic journey in search of the mythical figure known as the Worker of Secrets - the one being in the world who can unravel the secrets of the Infinity Blade.
Based on the bestselling video game from ChAIR Entertainment and Epic Games, this all-new adventure from acclaimed fantasy author Brandon Sanderson digs deeper into the fantastical world of Infinity Blade, a world of mystery and intrigue where magic and technology are indistinguishable, and even life and death are not what they seem.
Brandon Sanderson has published six solo novels with Tor Books-Elantris, the Mistborn trilogy, Warbreaker, and The Way of Kings-as well as four books in the middle-grade Alcatraz Versus the Evil Librarians series from Scholastic. He was chosen to complete Robert Jordan's long-running Wheel of Time series, to which he added 2009's The Gathering Storm and 2010's Towers of Midnight, as well as the final book in the series, A Memory of Light, scheduled for release in 2012. Currently living in Utah with his wife and children, Brandon teaches creative writing at Brigham Young University.


Review:
Siris trained in swordplay all his childhood and youth, giving up a normal childhood and even regular, everyday food choices. He was completely disciplined knowing he was the family’s and community’s designated knight to face the tyrannical, immortal godking of his country. No one expected Siris to succeed as the town leaders know he is just a sacrifice. But, to their surprise, and subsequent dismay, Siris kills the godking and returns home. They refuse to allow him to stay as they expect retribution.

Siris decides he will return to the scene of the battle to determine what he can do to protect himself from being the target of vengeance. What he finds changes his world and thrusts him into a further battle he hadn’t planned on. Along the way he picks up two companions who may or may not be trustworthy. One is Isa, a female warrior who wants to still the blade. The other is a changeable, stick golem named Tel, who will obey Siris’ commands except for answering specific questions about his mission.

I liked Siris, Isa and Tel, who are well developed characters set in an interesting plot of power and change. I appreciated the conflict and growth in Siris’ character. I also liked that the full story in a short book. I am not familiar with the game but still enjoyed the book. I do want to read the next in the series. I recommend this to fans of sword and sorcery.

Audio Notes: Samuel Roukin does a great job with the narration. His British accent fits the nature of the story and the characters. I enjoyed the rolling “rs”. The narration enhanced my enjoyment of the story. I will want to listen to the next.