This is an engaging post-apocalyptic that I found hard to put down. 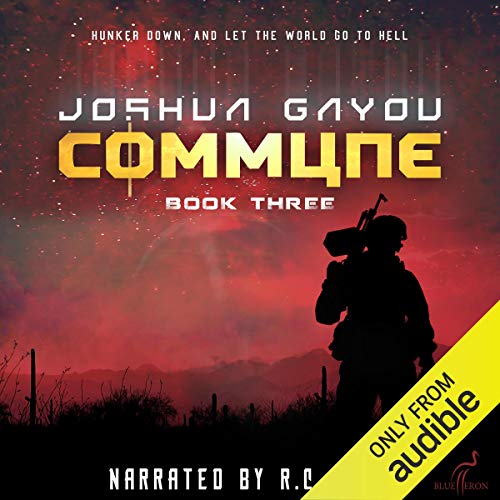 
Publisher's Summary
Having been bolstered with the supplies sufficient to carry them through the winter, the survivors of the Jackson commune must now hunker down and endure the bitter Wyoming snows, while to the south, factions are beginning to form, coalescing from the ashes of the dead world.
Out in Arizona, the leftovers of the US Military encamped in the last known surviving tent city: the Elysium Fields.
In Nevada, a clan of scavengers grows ever larger, each day bringing them a step closer to collapsing under their own weight.
Resources are becoming scarcer by the day as the world trudges on, and as it so happens, the folks up in Wyoming appear to be sitting on prime real estate....

Review:
The survivors of the Jackson commune are preparing for a long winter even as they begin plans for a green house in the spring. Slowly the visits down the mountain to the town are halted but not before Jake puts in a secret supply request. This turns out to be a wonderful surprise.

While the commune is hunkering down, two other groups are on the move. The leftovers of the US Military, under Captain Otter, are preparing to move the tent city from the Elysium Fields in Arizona to Jackson, Wyoming. Otter’s goal is to gather survivors wherever they may be so he can fulfill his mission to protect the US citizens. He will be returning Wang to the commune, but his goals may not be welcome by Jake and the other commune occupants.

Meanwhile a rough group of scavengers in Nevada is gathering survivors and struggling to provide for the growing group. There is a conflict between the leader, Clay, and a second level leader, Ronny. Ronny wants to push out to Jackson seeking revenge on the men who devastated his team out on the road. Clay is more interested in a place where he hopes to find a stockpile of weapons. Once they arrive at Clay’s destination, he is rewarded with more than the weapons.

The introduction/prologue of Book 3 indicates that this is Jake’s story. The reader does eventually learn more of Jake’s background through the length of the book. The first two books were presented from multiple character 1st person points of view. This story shifts to third person which makes sense since it is following other groups. I enjoyed the expanded world and characters, although Jake’s remarkable, but illusive character is still my favorite. Several other characters get focus too, revealing true to life personalities, some intriguing and some very ugly.

My only disappointment with this book is the extent of foul language. Some language is expected because you have military characters. But the worst of it comes from the ‘bad’ characters. I suppose that contributes to the ugliness, but I think the point could be made without the cussing. I still recommend this series to those who like post-apocalyptic stories that follow survivors.

Audio Notes: As always, R.C. Bray provides wonderful narration. There are diverse, clear, and fitting voices. I was engaged and my enjoyment of the story was enhanced by the narration.