This is another spot on entry in this dystopian, post-apocalyptic series.
Commune: Book Two
Commune Series 2
By: Joshua Gayou
Narrated by: R.C. Bray 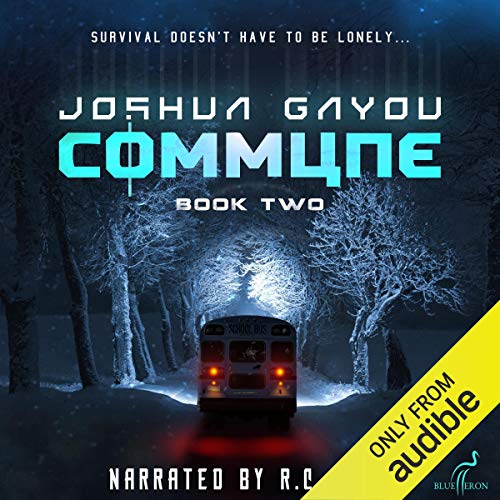 Publisher's Summary
2019 Independent Audiobook Award Winner for Apocalyptica
Survival can be a lonely existence...or not. The reality of the situation always comes down to a simple decision: What kind of world do you want to build?
The survivors have come to settle in the mountains of Wyoming, fighting day in and day out to establish a home for themselves in a near-empty world. Things are good at first; scavenging is a workable, short-term solution that seems to be providing all they need.
But they know that it’s only a matter of time before the food runs out. They need to scramble to find a sustainable solution before the clock stops, and for a little handful of people up in the mountains, the odds don’t seem very favorable.
Further south, a new band of people migrates across the map, running on fumes and searching desperately for a place to settle. All around them, as resources run thin, the world grows colder and more violent.
It’s getting worse out there, always getting worse, and it’s starting to look like survival might just depend on how violent they’re willing to get.... ©2017 Joshua Gayou (P)2018 Joshua Gayou


Review:
Brian, a member of the Jackson Commune, continues his character interviews in this episode. The primary character discussed is Blake Gibson, formerly SSgt Gibs. Gibs is a wonderful character and, as Gayou states in the intro, he did his best to make Gibs a true to life Marine Sergeant. Gibs is clearly well read and well spoken but he comes with the full blown rough language of a Marine.

This book provides Gibs the opportunity to tell about the misfit survivors that he gathered in his ‘bus’ as they struggled through Colorado. They scavenged along the way and hoped to find good supplies in Denver but found trouble instead. Gibs describes their losses and harrowing escape before he explains how they ended up in Jackson, Wyoming where he was fortunate to meet Jake, the leader of the commune. In the early days there weren’t outsiders aware of the location of the secluded cabin and surroundings. Once Gibs arrived with his busload of people the occupants grew from three to over twenty. It was important that everyone find a task they could perform to contribute to the community.

The story goes from desperate gun fight to methodical, planning and working toward long term (at least past winter) survival. Some interviews are shared from Amanda and a few others which gives a break from all Gibs. In spite of the potty mouth, I enjoyed the fighting action and the prepper development activities. I am looking forward to book 3. I recommend this book and series to readers who enjoy real to life post-apocalyptic stories.

Audio Notes: R.C. Bray is a great narrator for this work. He captures the voices and personalities of the characters. His narration enhanced the book for me. I plan to continue to listen to the audio versions.