#NetGalley Book Review: The Keepers by Jeffrey B. Burton

This is an engaging and easy reading mystery.

The Keepers
by Jeffrey B. Burton 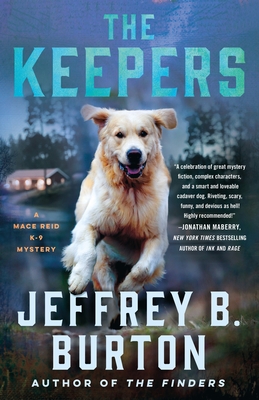 Jeffrey B. Burton's The Keepers is the next installment of the Mace Reid K-9 series, featuring golden retriever cadaver dog Vira and her handler, Mason Reid.
Mason “Mace” Reid lives on the outskirts of Chicago and specializes in human remains detection―that is, he trains dogs to hunt for dead bodies. He calls his pack of cadaver dogs The Finders, and his prize pupil is a golden retriever named Vira.
When Mace Reid and Vira are called in to search Washington Park at three o'clock in the morning, what they find has them running for their very lives. The trail of murder and mayhem Mace and CPD Officer Kippy Gimm have been following leads them to uncover treachery and corruption at the highest level, and their discoveries do not bode well for them . . . nor for the Windy City itself.
The Keepers is an exciting, fast-paced mystery filled with courageous dogs you'll want to root for.


Review:
Mace is a dog trainer who has a special golden retriever, Vira. Vira not only sniffs out the dead bodies, she also picks up the scent of the villains who delivered the death blows. The first scene involves a music artist and Vira is silent at the gruesome crime scene and at the funeral. Mace begins to wonder if Vira didn’t get the killer’s scent until Mace and Vira join CPD Officer Kippy to interview another suspect.

Shortly after solving the first murder, Mace and Vira are called in to find a missing person when foul play is suspected. Vira quickly finds the body which has clearly suffered a brutal death. Before leaving the area, Vira alerts to two men who arrive on scene. Mace calms Vira and gets out of the way because she has just focused the crime on members of the authority.

Mace is soon threatened, and he is ready to move to Alaska. Kippy and her partner talk Mace into a plan to take their suspicions to another arm of authority. But they don’t realize the deadly determination of the criminals they are trying to gather evidence against.

The story moves quickly and has good action. I cringed when several characters suffered injuries. I enjoy the easy mode of the writing and I like the gentle, developing relationship between Mace and Kippy.

I liked book one, The Finders, and book two. I will be glad to read more in the future. I recommend the series to fans of easy mysteries, especially involving dogs.