This is a pretty gritty, good thriller. 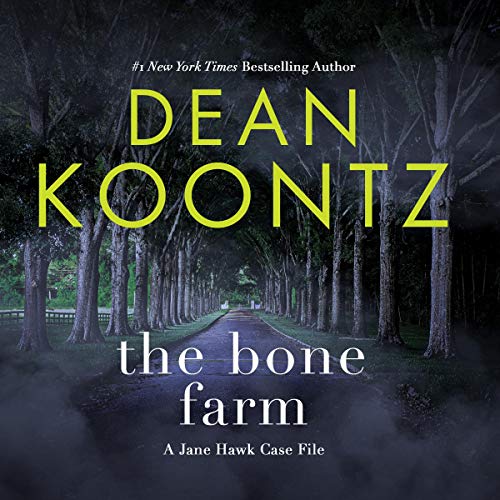 Publisher's Summary
An audio original novella featuring bestselling author Dean Koontz’s compelling new heroine, Jane Hawk. From the case files of the former FBI agent before she became the nation’s most wanted fugitive - The Bone Farm details a desperate man-hunt for a serial killer before he murders again.
Katherine Haskell, a young college co-ed is on her way back to school, but she never makes it there. Instead, she becomes the latest prey of the rapist and murderer dubbed by the tabloids the “Mother Hater.” He is a twisted soul who kidnaps young girls for pleasure then discards them.
Katherine is missing, but she’s not yet dead. FBI agents Jane Hawk and her partner Gary Burkett must descend into the hell of this killer’s mind to solve the case before it is too late. The question is - will they both get out alive?
©2018 Dean Koontz (P)2018 Brilliance Publishing, Inc., all rights reserved.

Review:
Jane Hawk is an FBI agent hunting down a serial killer who preys on young women. The man is known as the “Mother Hater” and Jane and her partner, Gary, are closing in. But they will find a surprise when they face the true killer.

This is a quick story that introduces Jane as a skilled agent who uses her acumen to avoid being trapped and is able to use her weapon if needed. There are chapters from the view of the killer, so the reader has gritty information that Jane and her partner don’t. How the FBI, particularly Jane, handle the interview and resulting actions is engaging. It has been years since I have read Koontz. This reminds me that he delivers a gripping story but often with dark, gritty elements.

I've been eyeing books in this series, so I am glad to listen to a prequel to get a better feel for the protagonist. I note the blurb refers to Jane as a “former” FBI agent who became the nation’s most wanted fugitive. That is intriguing and makes me want to read more in the series. I recommend this short thriller to fans of Koontz and fans of dark suspense.

Audio Notes: Elisabeth Rodgers and James Anderson Foster do a fine job with the narration. They captured the foibles of the characters and made the story more enjoyable for me.


Source: August 2021 Audible Plus. This qualifies for 2021Audiobook goal.
Posted by Martha Eskuchen at 9:30 PM